Today I took some time out of the office to attend a student-led fashion conference on campus (I work at a University). Sustainability was a focus for many of the speakers and I came away with some ideas of what I could make to commemorate this year’s Fashion Revolution Week taking place 22 – 28 April. Last year I made a Fashion Revolution Tee, and I’d like to create or alter a garment again this year (potentially using my fabric scraps).

I also came away with a desire to try growing fabric! Kirie-Lea Cussen presented her project to grow a bacterial-cellulose fabric for garment making using a kombucha recipe, inspired by Suzanne Lee’s work. Suzanne Lee has shared her ‘recipe’ and process online. I just need to figure out where on earth I could store a large container of bacteria at a consistent temperature…

I was wearing this top today. It’s Digital Pattern Library’s Belted Sweater in a cotton spandex knit from Girl Charlee. This is a recent favourite which I’ve worn to quite a few meet-ups but am only just blogging. I love the shape of this, which can differ quite a bit depending on how you tie the belt. I tend to tie it at the front, as pictured here, and really like how the back hem fans out as a result. My other favourite feature is the wide neckband.

I really want to make another Belted Sweater in a thicker fabric for a more exaggerated silhouette, and I also think it would look quite elegant in a lighter weight and drapier fabric. Two more options for the future sewing queue!

All of those projects will need to wait in line though, as my next project is a ‘waspie’ corset to wear to visit the Dior exhibition at the V&A next Month. I’m planning to wear the New Look inspired outfit which was my contribution to The Refashioners 2018 to the exhibition, with the addition of a waspie corset underneath. I was inspired by Gertie’s B6643 release with Butterick, which I finally managed to get hold of in the UK today, to give a corset a try.

If you’re not familiar with Digital Pattern Library I’d highly recommend their Instagram account, and their most recent pattern the Ruffle Tee is very cool. 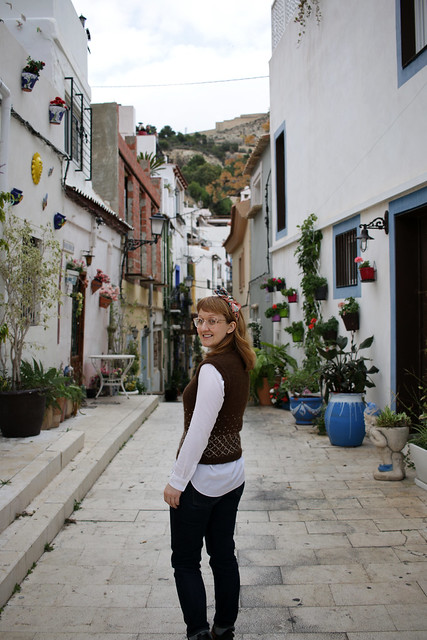 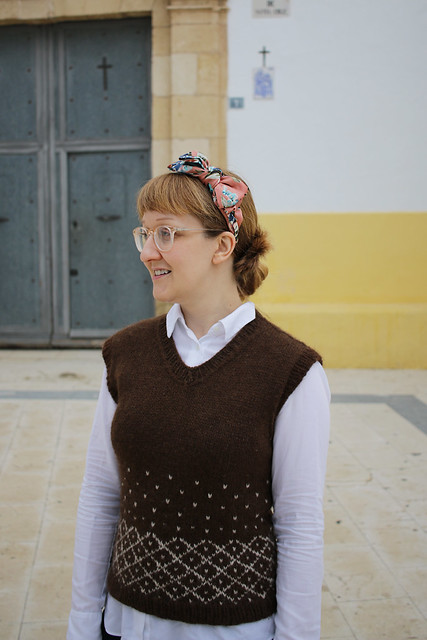 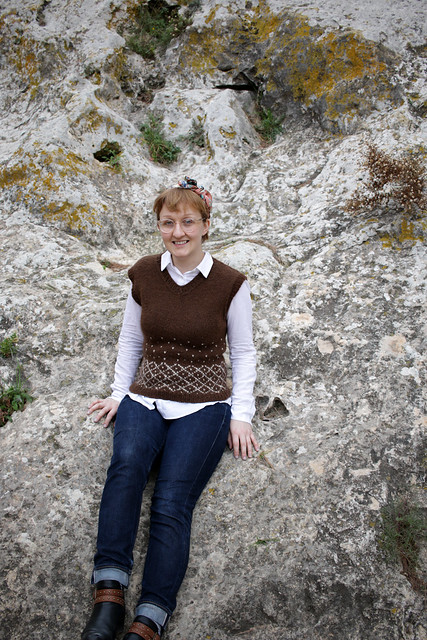 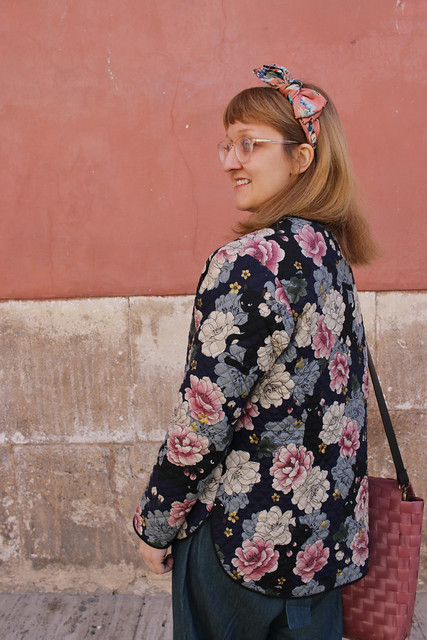 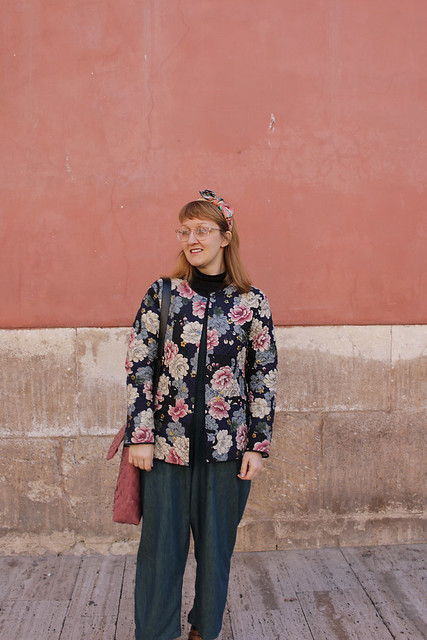 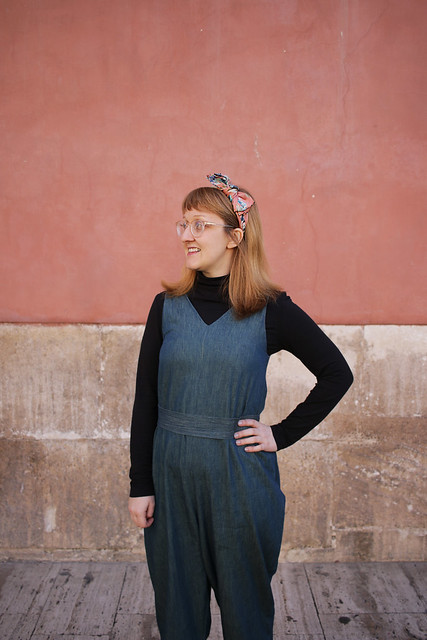 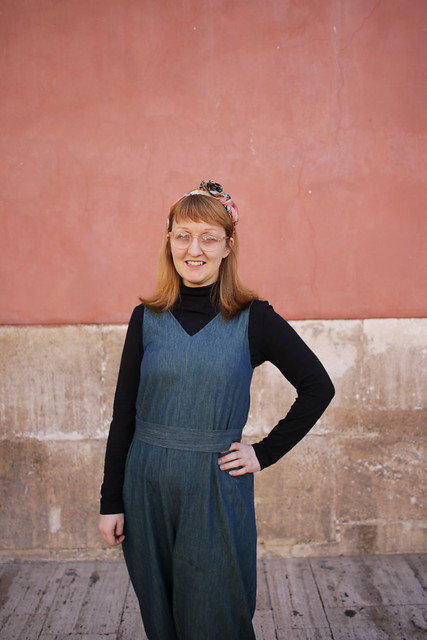 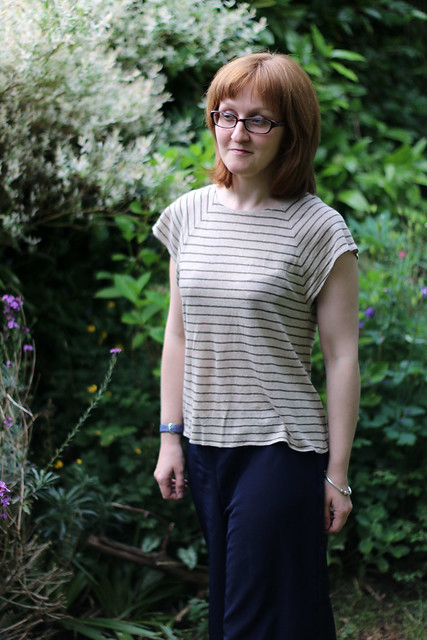 I’m not normally someone who manages to squeeze projects out of small pieces of fabric. In fact, I normally always buy ‘safe’ amounts of both fabric and yarn, and end up with some left sat in my stash once the planned project is completed.

However, lately I’ve started a few knitting projects where I’ve run out of yarn part-way through (due to using stash yarns, or just not buying enough), and a few sewing projects which have required some creative cutting. 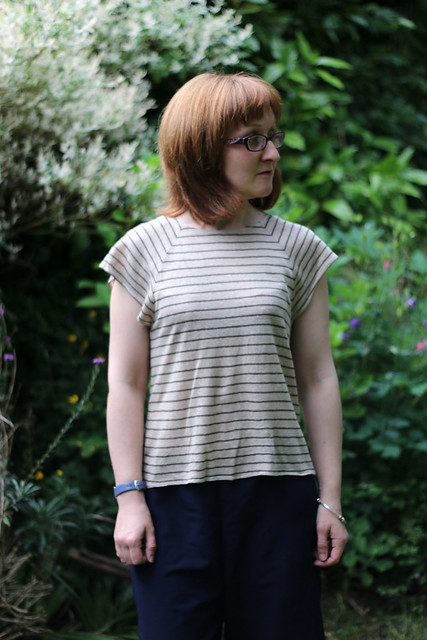 During a recent trip to London I treated myself to a visit to Cloth House in Soho (very close to Liberty). I wasn’t supposed to be buying any fabric but couldn’t resist these two fabrics from their knits section (housed downstairs). To keep my shopping to a minimum I bought a half metre of each, assuming I’d have enough for a small top. As you can see from the photos, I did have enough fabric – but only just, particularly as I complicated things by choosing two stripey fabrics. 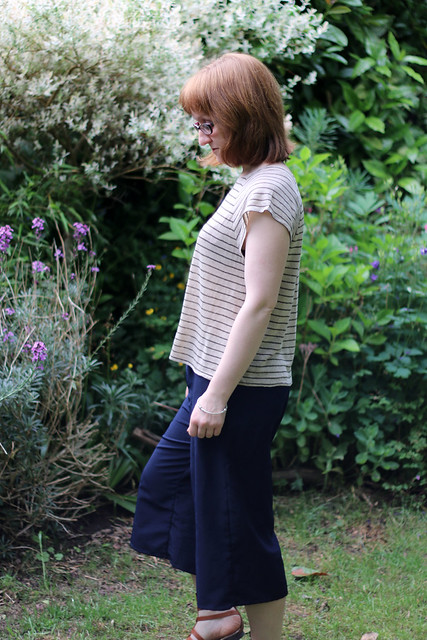 This top is made using dress pattern V, Mini Dress with Raglan Sleeves from Stylish Party Dresses by Yoshiko Tsukiori. I’ve previously made and blogged the dress here. For this top version, I placed the pattern pieces on top and cut to edge of the fabric – which worked out just the right length for a top. 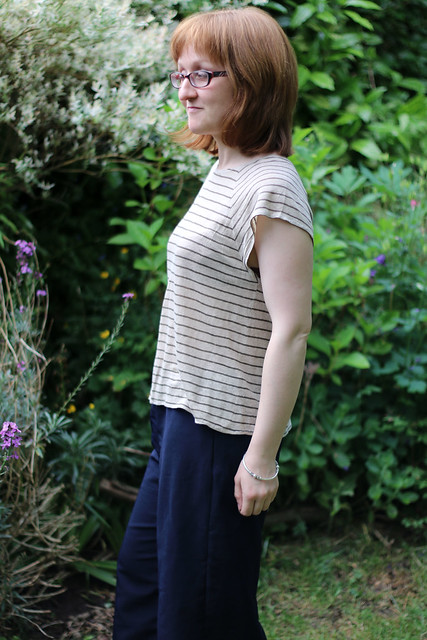 I really like the finished top but squeezing raglan sleeves (particularly pattern matched ones) out of only half a metre of fabric was tight, and one of the sleeves had to be pieced. The fabric is a very lightweight knit which feels lovely, but is extremely prone to creasing. 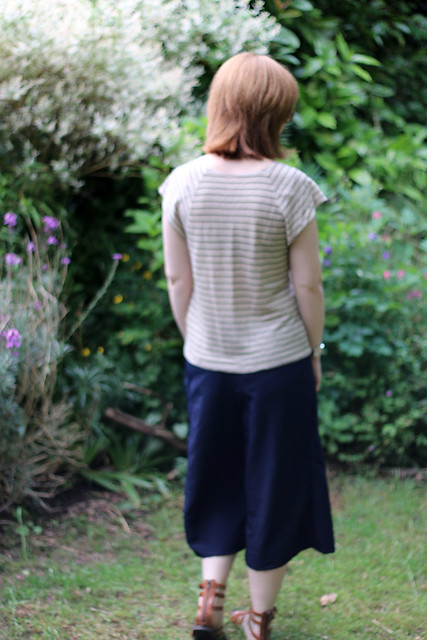 For the second fabric, I thought I’d try Grainline Studio‘s free one-size Hemlock Tee. The only change I had to make to the pattern due to fabric limitations was reducing the length of the sleeves. If working with an even small piece of fabric the sleeve pieces could be skipped altogether. 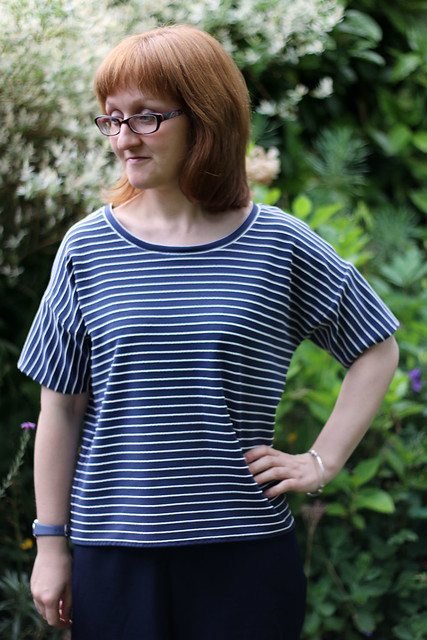 The fabric is a lovely weighty double knit, with raised texture on the white stripes. (I’m pretty sure Zoe used the same fabric for this tunic). The body of the fabric means that it emphasises the boxy shape of Hemlock, and I’d like to try Hemlock in something slinkier for a closer fit. 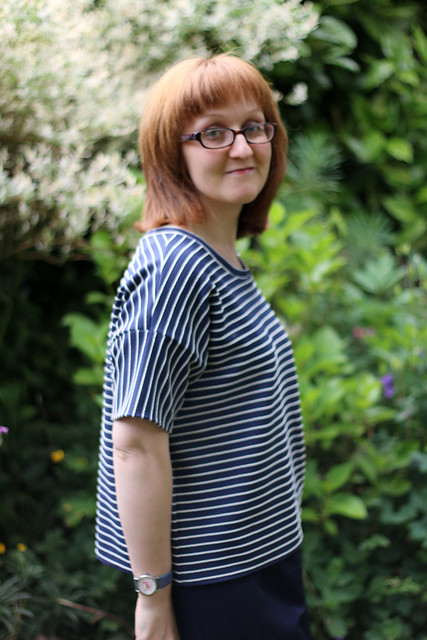 I currently work in an IT department with mostly male colleagues. They aren’t always the best at compliments (one day when wearing a red dress and lipstick, I was told by one colleague I looked very red, and I’m pretty sure that was supposed to be complimentary). The first time I wore this Hemlock to work a different colleague told me it looked like two tea-towels sewn together! 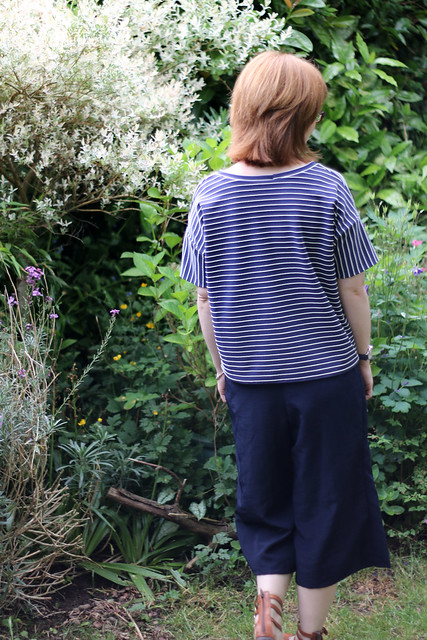 The next tee I fancy trying is Fancy Tiger Crafts’ Adventure Tank which definitely looks doable in 1/2 metre of fabric from my stash. 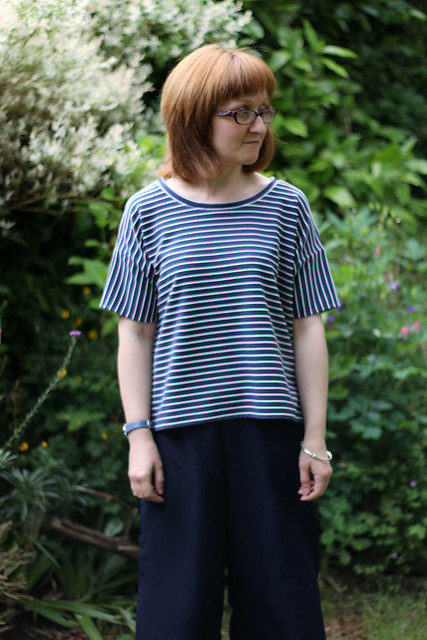 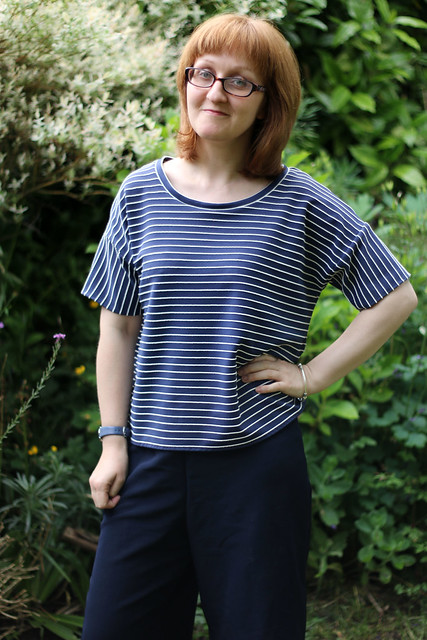 Today the Christmas/New Year holiday ended for me and I went back to work. The Christmas holiday is my absolute favourite time of the year. Partly because I’m crazy about Christmas (I watched the documentary about Liberty recently and their staff plan Christmas all year! Clearly I should be working there). Partly because I get a couple of weeks off work (the benefit of working at a university) so have two solid weeks to do whatever I want (e.g. sewing, crafting, gaming & watching loads of old movies!).

Along with an Anna dress and Archer shirt, I made the Waterfall Top from the January issue of Burda Style. I made this right at the beginning of the holiday. I read the Paunnet review of the January edition of Burda one morning, went out shopping that day and picked up a copy, and had the top finished by the evening. I thought it would be a nice speedy sewing fix and it was.

The only alteration I made to the pattern was to reduce the height of the waistband by half, as I found that my fabric wasn’t draping well with the very high waistband. The fabric is a 100% Viscose, purchased from Guthrie and Ghani. It’s perfect for this blouse, nice and drapey. As you can (kind of) see from the photo below it features a retro print.

The January issue of Burda features a few other projects I fancy giving a go. If only I were still on holiday I could have them sewed up in no time!