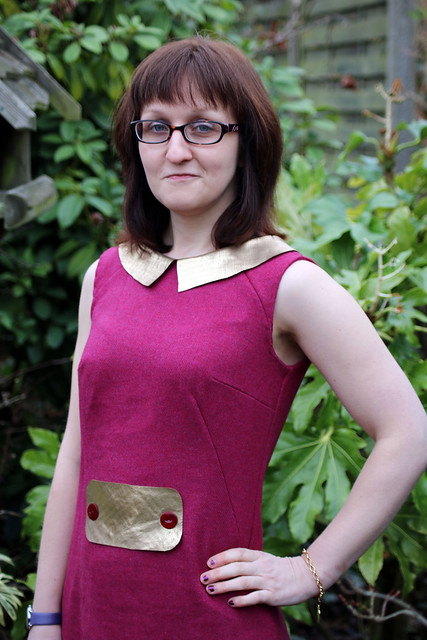 Having decided that I wasn’t going to make Tilly and the Buttons’ Francoise in time for the #SewingFrancoise contest, I cracked at the last minute and whipped this up over Saturday night and Sunday morning; just in time to wear to my brother’s engagement party on Sunday afternoon. I snuck out of the party for a few minutes to take these photos in my mom and dad’s garden. 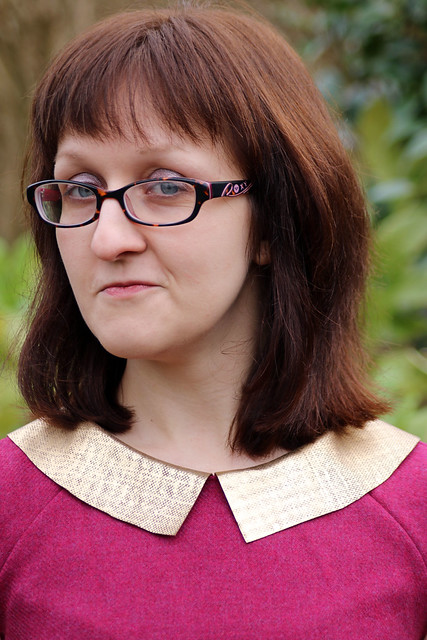 The dress is made in a purple-pink wool I bought while in Paris.The gold leather I used for the collar and tab was also from Paris – a pressie from Ma Petite Mercerie that was provided in our goodie bags. I thought the gold would be suitably festive:) The buttons are vintage, from a charity shop. The only downside of this wool is how much it creases – the dress was nicely pressed before I left home, but you can see it was creased by the time I reached my parent’s house! 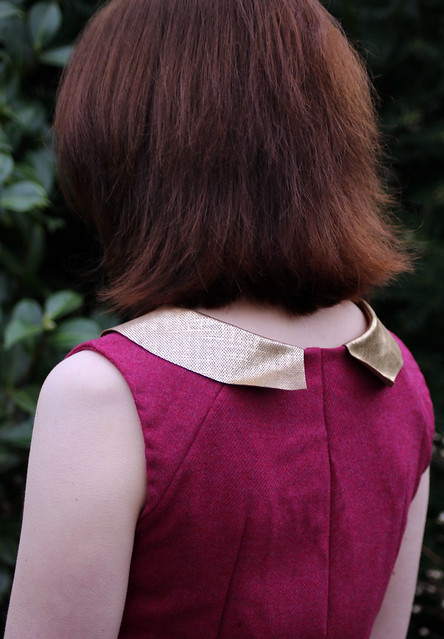 I cut a straight size two and took it in slightly at the upper back. I actually fall between sizes, but I find Tilly’s patterns tend to have a bit of ease so I went with the smaller size and it’s a good fit. I cut the leather sections on a single layer as I didn’t think they would turn and press well if I doubled them up. 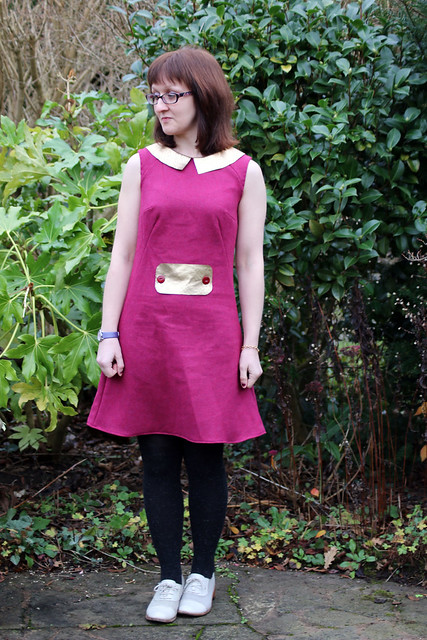 It was nice to enjoy a spot of selfish sewing this weekend; now to get back to making Christmas presents before I run out of time.

I feel like I’ve been waiting to make the Mathilde Blouse, by Tilly and the Buttons, for ages! I knew I’d love it as it’s totally my style – big sleeves, buttons down the back, high neckline. I bought the pattern weeks ago, cut the fabric out and then it sat around for a while, but last weekend I finally sat down and got sewing. It’s a pretty simple make especially with the online instructions available from Tilly’s site. It does take a good few hours though, or at least it did for me. I started machine sewing in earnest last Saturday evening and next thing I knew it was 1am and there was still lots to do! That’s what happens when you’re busy sewing – time passes faster!

Being too lazy to make a muslin, I did at least go with a reasonably priced linen-blend (about £5 per metre) instead of the Liberty fabric I picked initially. Now that I know it fits me (I cut size 2 with no alterations) I’m planning to pop back for some of that Liberty fabric for version two. Although this was a first attempt I didn’t skimp on my finishes. I used French seams absolutely everywhere and bound the edges of the facing and sleeves. Look how neat the inside looks:)

You’ll notice the blouse looks a little creased, but I had just cycled to a local park. For a linen it doesn’t crease too badly. The buttons I used down the back are handmade oak buttons by Against the Grain. I bought these from Sue, the artist who makes them, at a craft fair where we both had a stall back in August. I think they’re a great match for the checked fabric.