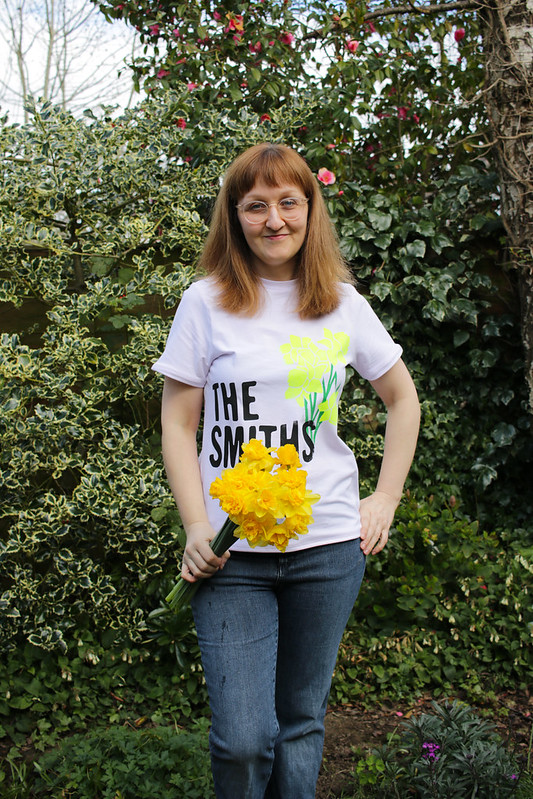 Hi everyone, I’m sharing some photos taken in our garden today, which is possibly the furthest I’m venturing for any blog photos for a little while. I haven’t been stuck at home long enough to actually tackle any gardening yet (it may be coming), but I did pop outside to get some pictures of these t-shirts, and to join in with an online tap class on the patio (not pictured). 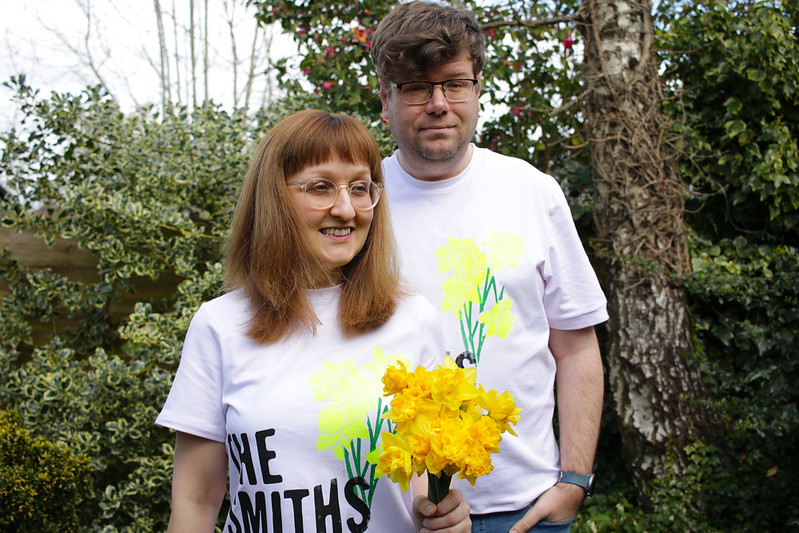 These t-shirts are one of my projects for the Sew Your Birth Year challenge currently being run by The Sewcialists. I was born in 1983, the same year my favourite band, The Smiths, formed and first toured. These tees are based on the design of a t-shirt from that original tour, featuring the band name and a bunch of daffodils. I was originally just making myself one but Phil requested one too, cue matchy matchy photos! 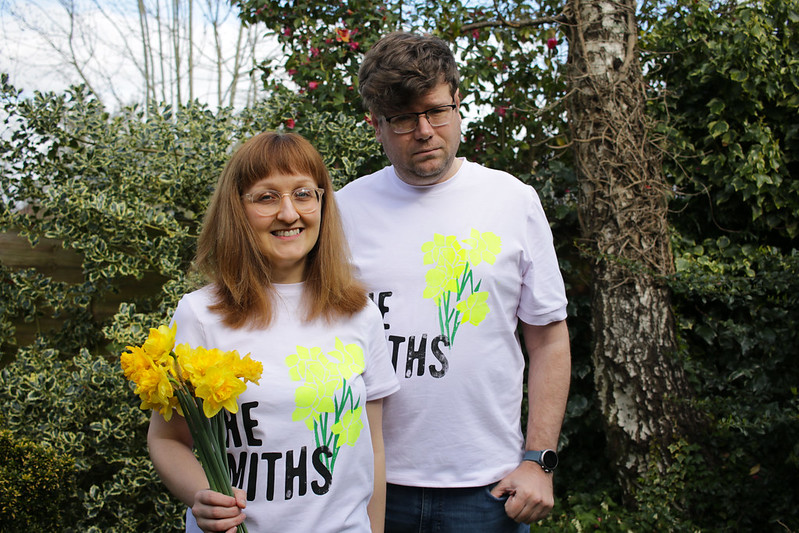 My t-shirt is a Seamwork Jane tee (size XS; see my previous version here). Phil’s t-shirt a pattern hack, it’s the neckline and shoulders of the Thread Theory Strathcona Henley, and the body of the Seamwork Eugene, graded between the two at the armhole (also using the sleevehead of the Strathcona, but the bottom of the sleeve is the Eugene!). 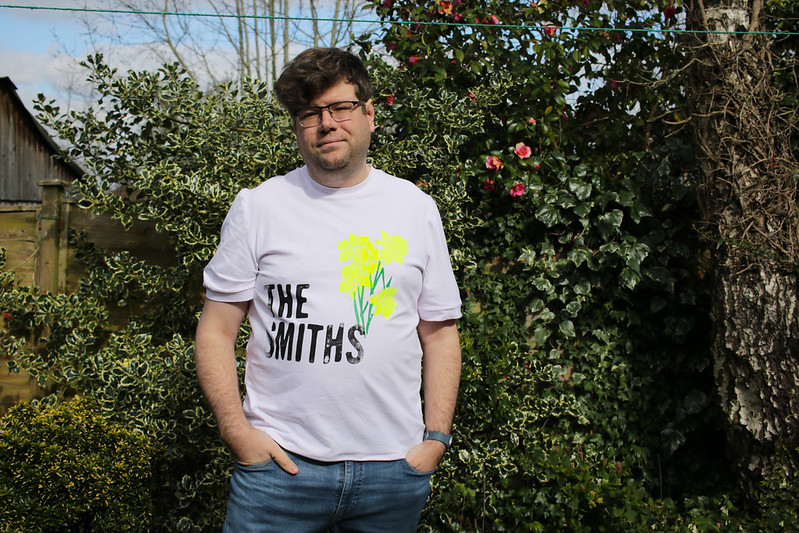 The fabric for both is a ‘Maria’ cotton jersey from Sew Me Sunshine. I completely overlooked that a t-shirt for Phil requires more fabric than I am used to ordering to make a t-shirt for me, and I used every scrap of the 1.5 metres of fabric I ordered (to hell with grainlines) to cut out these tees. I very carelessly pre-washed the white fabric along with some coloured jersey and it came out of the washing machine a light pink (the tees are pinker in real life than they look in these photos). Despite my errors the t-shirts came to fruition, and if anything a pink t-shirt is more interesting than a white one! 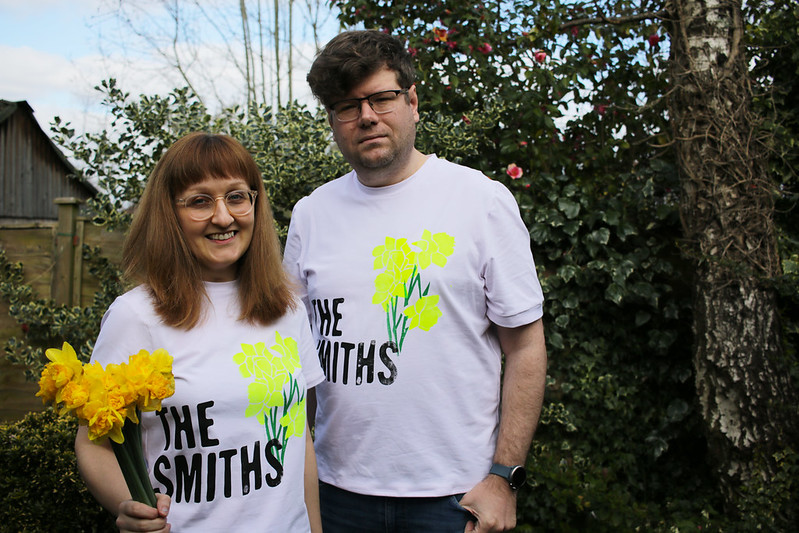 I screen printed the designs by cutting three stencils out on acetate sheets (one for each colour), and printing through these using a screen and fabric printing inks. I haven’t done any screen printing for quite some time and the black lettering is quite patchy, but I don’t think that looks out of place on a band tee. 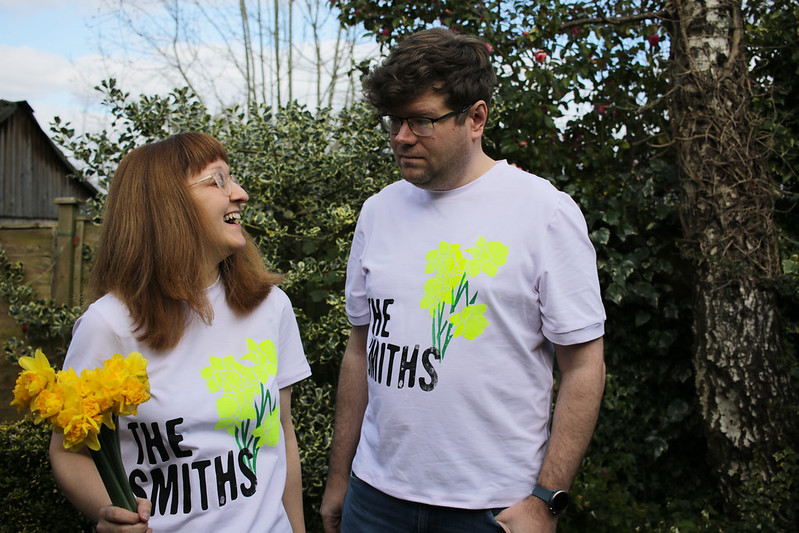 I have another 1983 inspired project to share very soon. Due to being a teenager at the time, the 90s is the decade where I have most personal connection with the clothes, including with lots of individual garments I wore or wanted to wear, but it has been really good fun to find sewing inspiration from the year I was born. 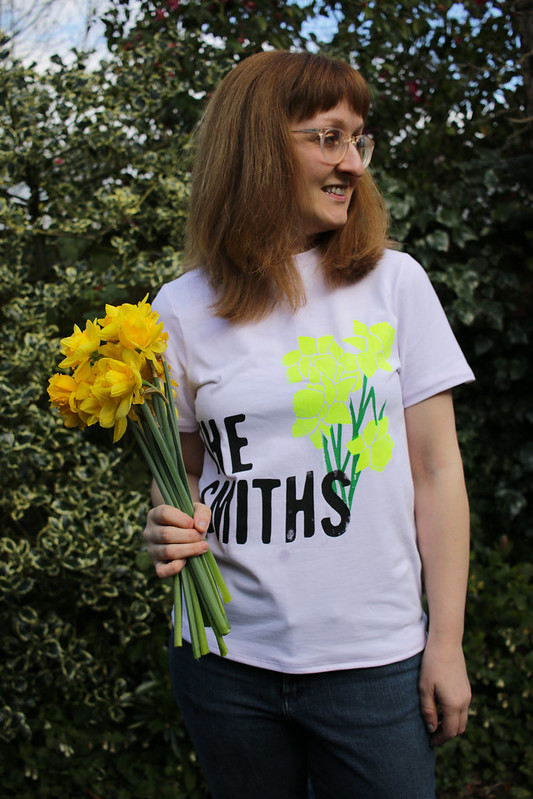 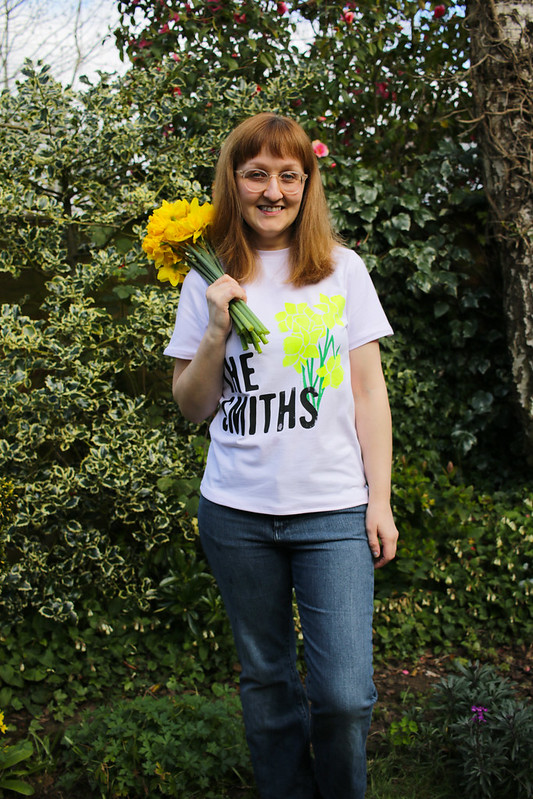 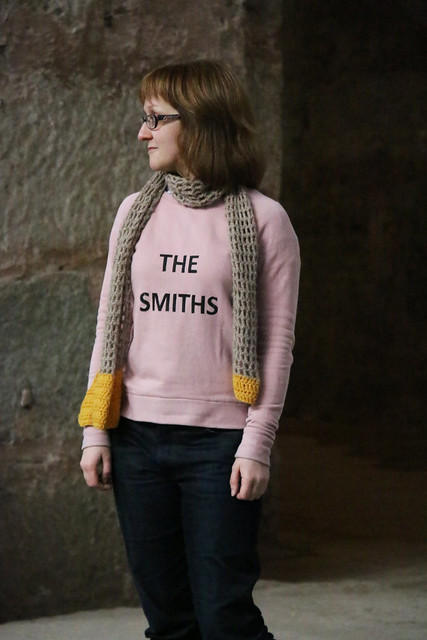 This is my latest Linden Sweatshirt (number seven blogged). It’s View A, Size 0 – although in this fabric I should probably have sized up to a 2 as it has limited stretch.

The original inspiration for this jumper were the excellent British wool band jumpers which Hades released earlier in the year. The Hades jumpers were limited edition and I missed the chance to buy a The Smiths jumper, so I thought I’d make my own. I’d love to knit something closer to the Hades original, but am a bit wary about tackling knitted lettering without a pattern, unless anyone can recommend something similar?? 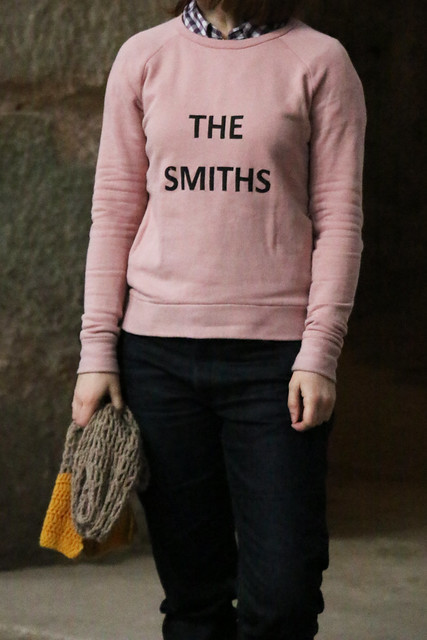 For this version, I cut a stencil of the lettering in acetate (more stable than paper and also reusable) and screen-printed the text using black ink onto the pre-cut Linden sweatshirt front. For reference, I always use Permaset Supercover screen printing ink to print on fabric and find it really reliable, Fred Aldous stock it in the UK. 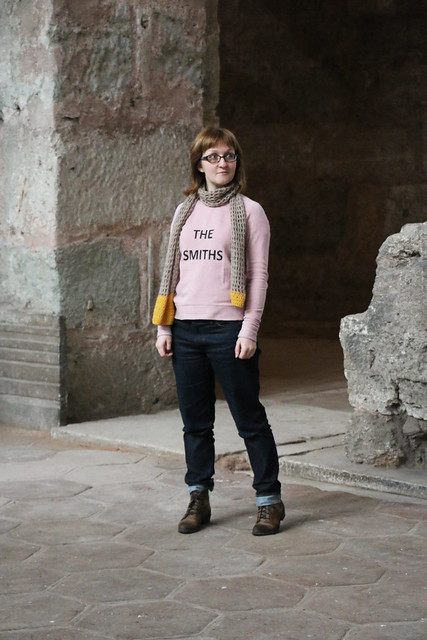 I found it difficult to gauge the best size and placement of lettering while the sweatshirt was in pieces. If I make another, I will increase the size of the lettering, and move it closer to the neckline. 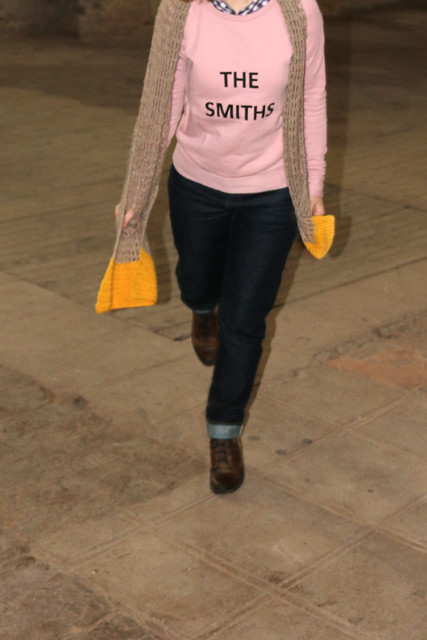 The fabric is a loop-back jersey purchased at Guthrie & Ghani during SewBrum. This pale pink is great for letting the text stand out, but does also get grubby easy. 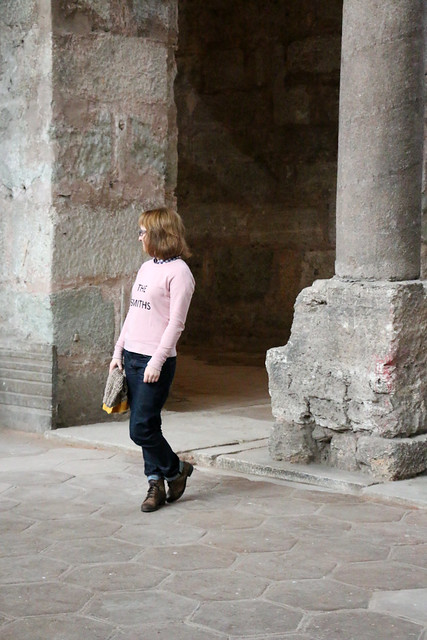 I also made my scarf. This is TOFT’s Block-Colour Filet Scarf crocheted in their (British) yarn, in a natural (stone) for the main colour, with yellow for the accents. I’m pretty sure this is the same pattern (knitted in a solid colour) available from TOFT’s free pattern section. I’m not great at crochet, but this is a nice easy pattern and a relatively quick project.

My jeans are not me-made, but were made in the UK by Community Clothing. 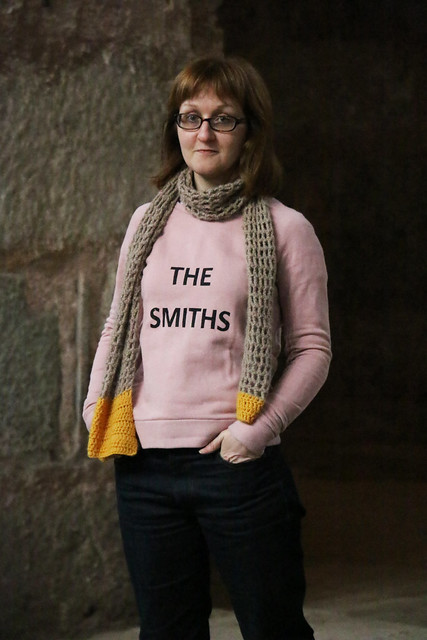 These photos were taken in Hagia Irene, near Topkapi Palace in Istanbul, which was the first Byzantine cathedral built in Istanbul, and is now a museum. Like all Byzantine religious buildings in Istanbul, this has had a varied history, including earthquakes and acting as an armory. We had the building entirely to ourselves on our visit, and it makes for a pretty atmospheric backdrop. 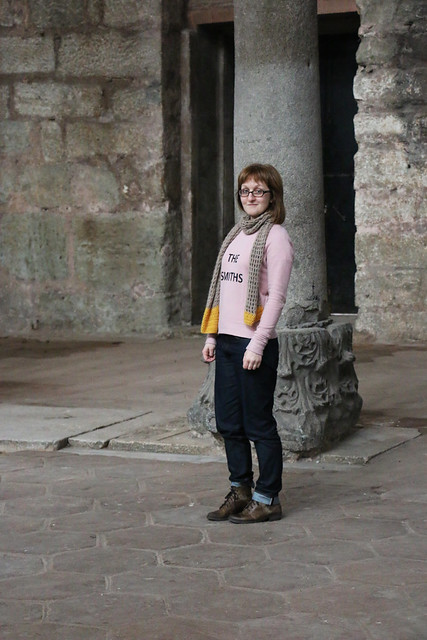 P.S. in a similar vein, I previously blogged a screen-printed Morrissey tee. 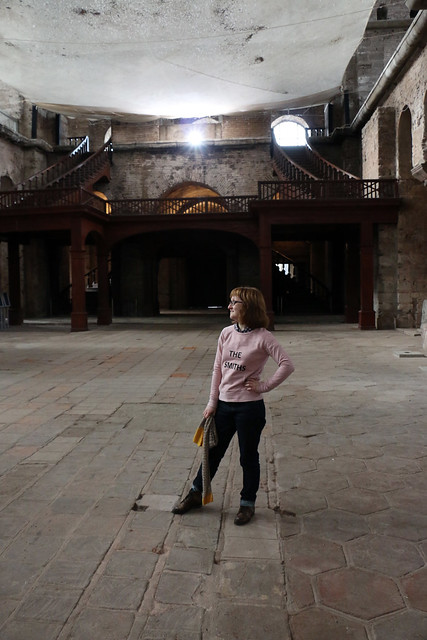 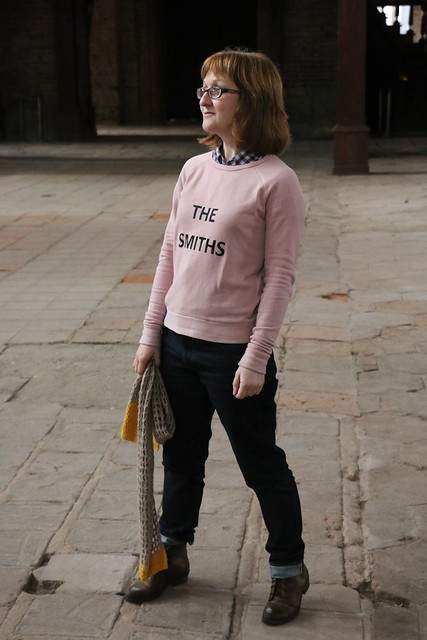 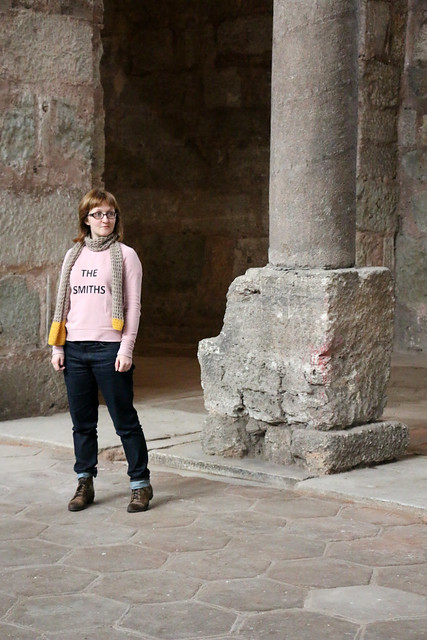 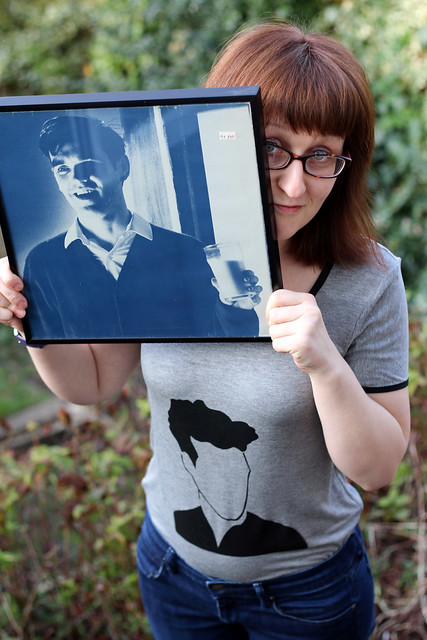 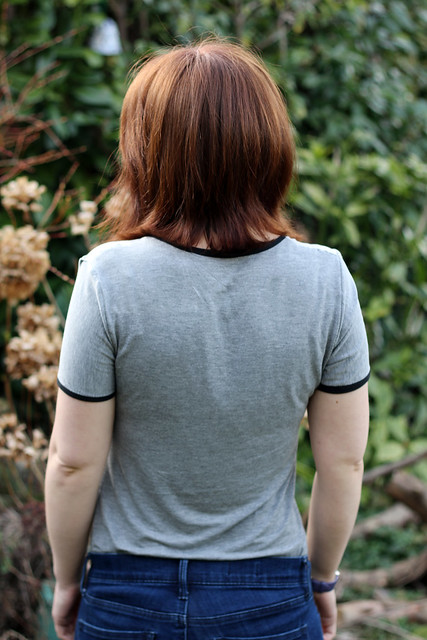 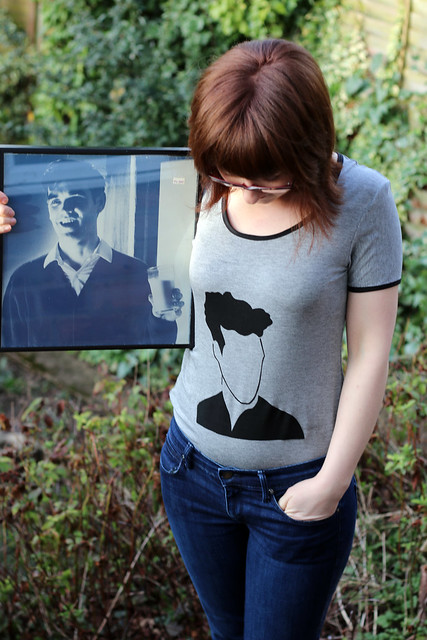 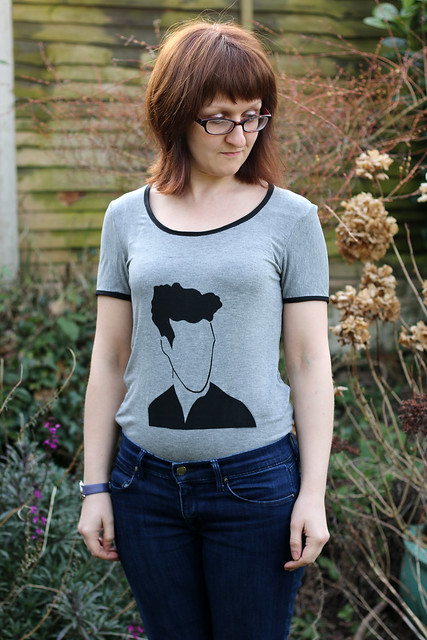 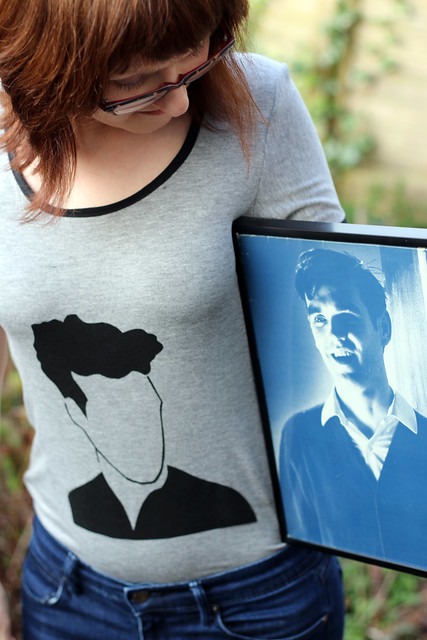