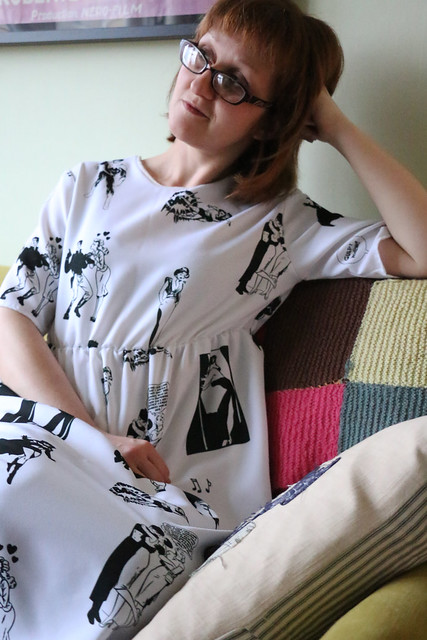 Contrado are a London-based company who offer fabric printing on demand. I talk about my experience designing and printing a fabric with them in my latest vlog, which you can view here:

As mentioned in the vlog, my design was inspired by a comic-print, black and white Prada skirt, which I eyeballed in a shop window. My design features some personal favourite comic characters / artists. 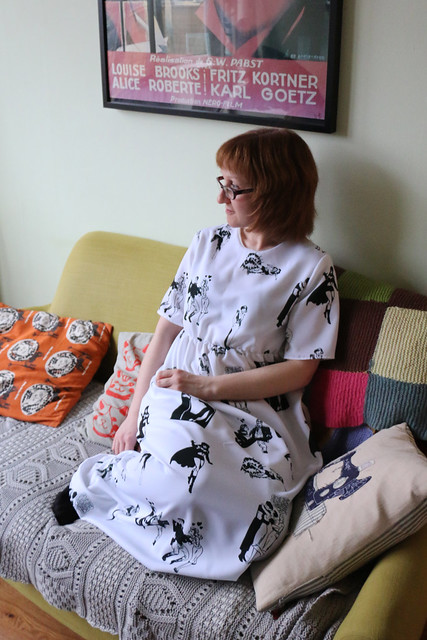 The design was printed on Contrado’s Crepe de France fabric. The fabric is light/medium weight, with lots of drape.  The image print quality is very high, with even small details printed clearly. The colour didn’t run when I washed the fabric, but I did get some colour/image transfer when I ironed this dress on a high heat (following one wash). The fabric is slightly see-through; I lined the bodice and will wear a slip underneath. 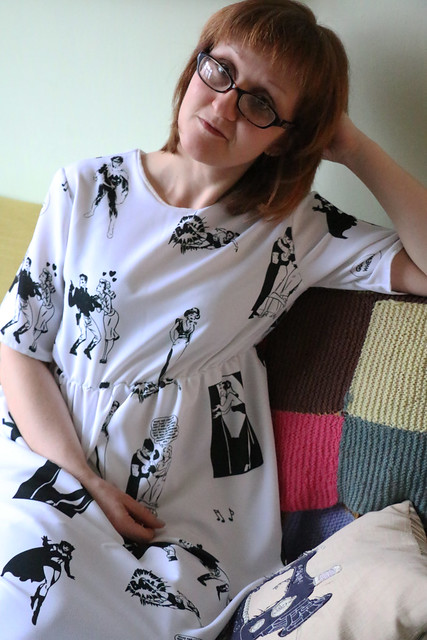 I used my fabric to make a Megan Nielsen Sudley Dress, with the skirt extended to floor length. I thought Sudley would be a good pattern to show off the fabric, due to the lack of fastenings or darts. As in my previous Sudley, I cinched in the waist of the dress by attaching elastic around the waistband. 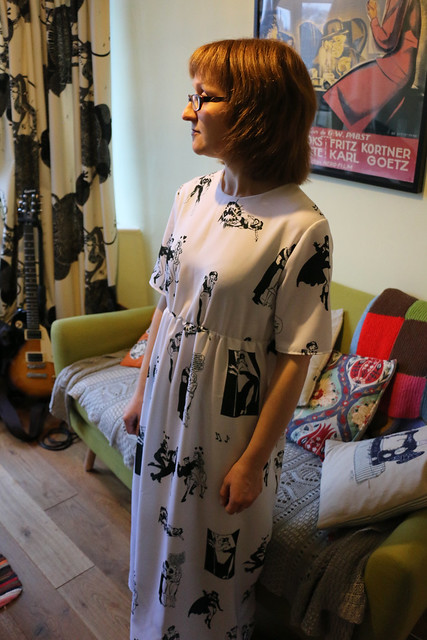 I’m looking forward to wearing this out – although slightly wary about how dirty the hem may be by the time I get home! 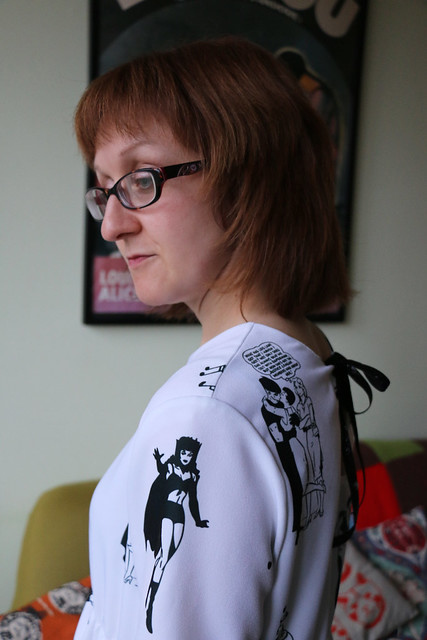 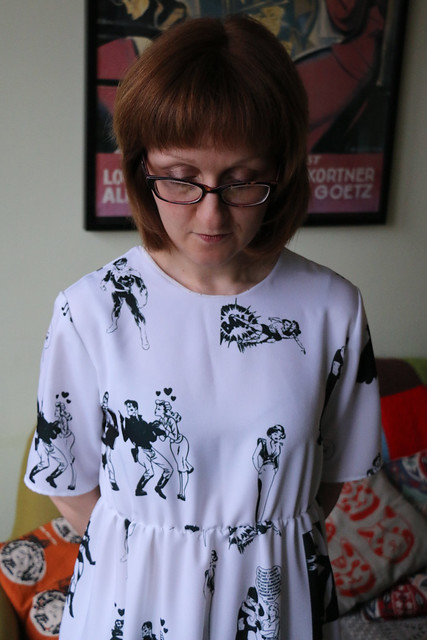 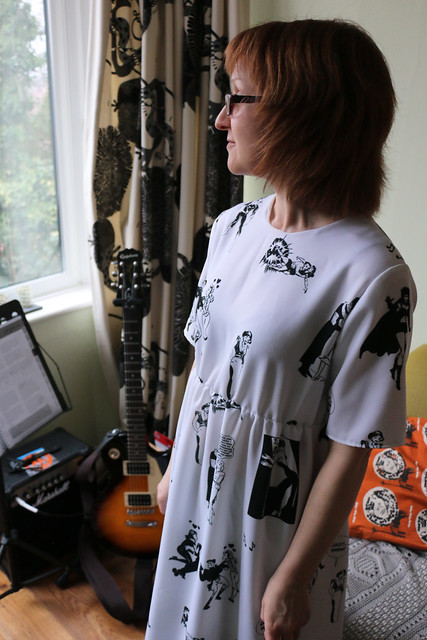 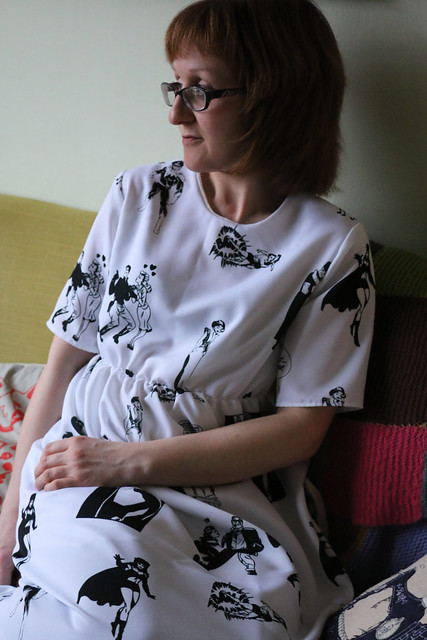 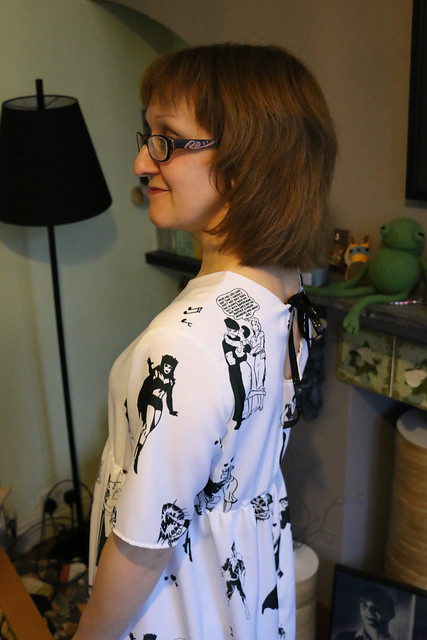 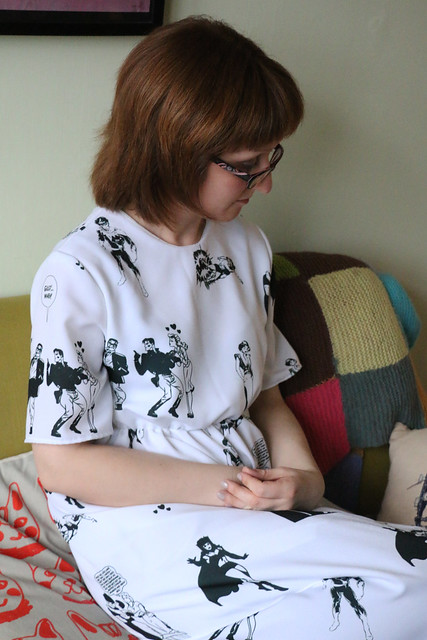 Disclaimer: I was provided with two metres of fabric in exchange for blogging about it, all opinions expressed are my own.

This week, I tidied up a previous linocut print to create a digital print of the image. The image is based on a woodblock print of the famous courtesan Shiratama by Harunobu.

Having screen printed some tote bags with Chinese characters I thought they might also look good on a door mat. This door mat features the characters 欢迎你 and lets guests know they are welcome. The door mat itself is shop bought with a screen printed design added by me.

These are available to buy from my Etsy store.

I was running a little late making Christmas presents this year. On the 23rd December I was busy screen printing bags as extra Christmas presents for lots of family members. I went with a two-colour hydrangea design on grey bags.

I did the screen printing in our shed and hung the bags out to dry on the washing line. It took longer than it should have as a neighbour’s cat decided to help out by joining me in the shed and winding around my legs!

A new monochrome linocut print, carved and printed last weekend and finally cut to size and framed this week. It’s sized 5″ x 7″ and printed on a pale purple card.

The image is based on a photo of Louise Brooks. Brooks fascinates me. Her life story is a perfect tragic tale, of a brilliant actress whose career was ruined by the studio system and her own unbending personality. I find that photographs of her convey a sense of that forceful personality, as well as her beauty.

Today is Mid-Autumn Festival, an important holiday in the Chinese lunar calendar. Mooncakes (月饼), pastry cakes which normally contains red bean or lotus seed paste and salted duck egg yolk, are eaten at the Festival and are frequently given as gifts (they tend to be quite expensive).

Pictured below is one of the mooncake linocut images I created for this year’s Mid-Autumn Festival.

The card pictured in the third photo is one of those I gave to colleagues at the Mandarin class I attend.

Last Saturday was my Dad’s birthday so I printed him a card featuring one of his favourite things – rallying. I decided on an image of a Subaru, my Dad’s favourite, throwing up a cloud of dust. I had a go at printing it on both a white & recycled card, and it’s available from my online shop if your dad would like one too!

Last weekend I attended a two-day screen printing class at Midlands Art Centre. We had a day of learning techniques, followed by a day of making whatever we fancied. In my case, I wanted to make items to sell at the craft fair me and colleagues were organising at work this week (p.s. things went well & we raised £1,717 for charity) so I made six tea towels. I used a stencil design and did two-colour fox and three-colour plant prints:

I also tried a couple of other screen printing techniques. These were direct stencil techniques – where the image is applied directly to the screen rather than creating a separate stencil which is placed over the screen.

The direct application techniques I tried were using charcoal and water soluble crayons. In both cases the image is drawn directly onto the screen and then printed onto fabric using a squeegee to push binder across the screen & print the image. A number of members of our group had a go at direct printing using procion dye, which gave a lovely watercolour-style effect. Unfortunately I didn’t get time to try the procion dye as I was too busy getting my tea towels finished!

I took a few photos of the process of printing using charcoal, which are included below.

I began by printing a simple block of colour as a brackground to my charcoal image:

I then drew an image (of a beetle) directly onto a screen:

And then, once the background colour had dried, I printed the charcoal image:

Direct application techniques using charcoal and water soluble crayons produce monoprints, as it’s only possible to get one true print before the medium begins to fade. You can see below I did a second print of my charcoal beetle drawing and it is much paler than the first print:

Here’s the simple print I did using water soluble crayons:

And another print using a paper stencil:

Me and my team mates at work are in the process of organising a charity craft, cake and plant fair. All proceeds from the fair will be donated to two cancer charities nominated by a colleague who is currently undergoing treatment for cancer. The fair isn’t until the 16th August but I thought I’d better start making some items to sell. I’m hoping to create a range of items (time permitting!) but thought I’d start with a linocut print.

This print is based on a Harunobu print of the courtesan Shiratama. I’m planning it as three colour print, but so far have only completed the black / outline layer. Below is a test print of the initial work.