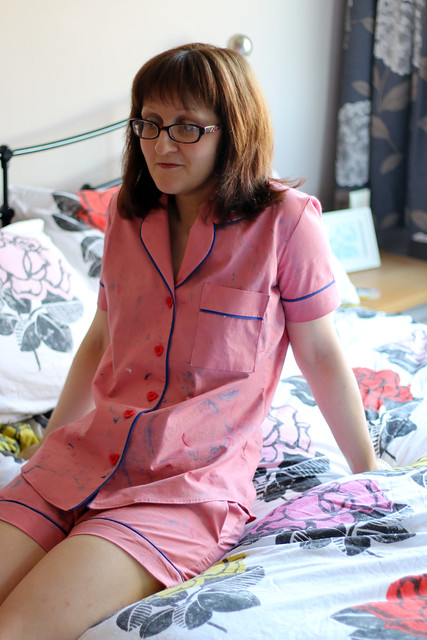 These ain’t your beginners’ pjs! I’m happy to say that I finished my Carolyn Pajamas in time for Monday’s pajama party deadline. I’m in the office on Monday, but I’ll be wearing them in spirit and putting them on for some luxurious lounging in the evening.

Unlike a lot of pyjama patterns, these aren’t a beginner project / quick make. They’re not difficult, but they are composed of quite a lot of pattern pieces. They took me about a day and a half (of admittedly relaxed sewing) to make up, plus half a day to dye the fabric prior to sewing. They’re sooo much more luxurious than most pyjamas though, that it’s definitely worth the extra effort. I’ve long had an obsession with pink pyjamas due to a pair worn by Hugh Laurie’s Bertie Wooster in the Jeeves & Wooster tv series. Bertie’s would definitely be silk though; I’ll have to make a silk pair next time. 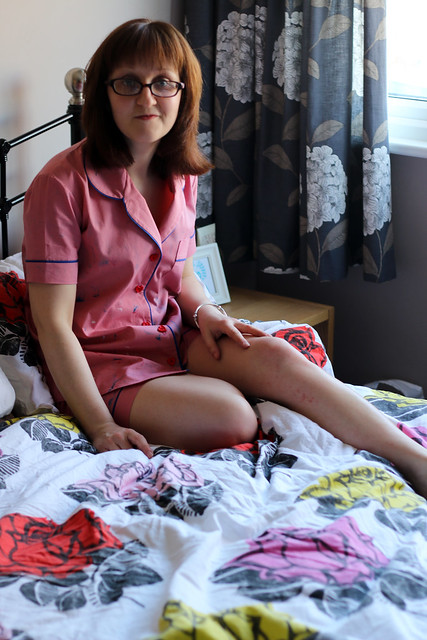 The fabric is a dark pink 100% cotton, purchased from Barry’s, which I marbled. I was inspired by an article on marbling in the February issue of Seamwork, and Amy pointed me to this HonestlyWTF tutorial on marbling using shaving foam. The original tutorial uses food colouring, but I substituted for the Jacquard dye in this kit which I knew was suitable for fabric. 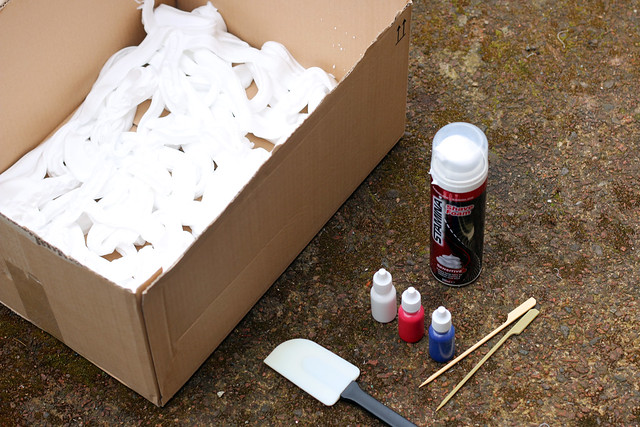 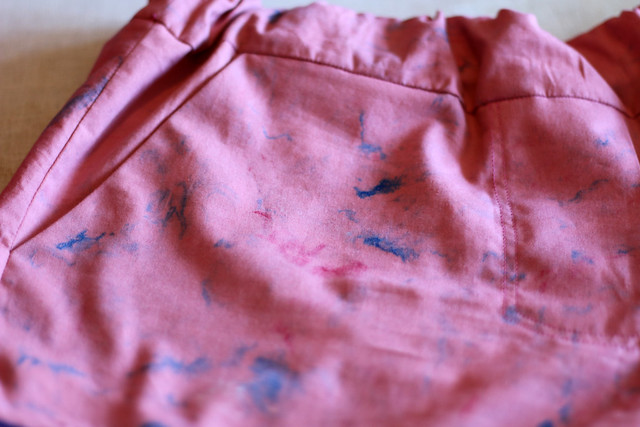 I cut my pattern pieces out before dyeing and did my dyeing in a large cardboard box (which was good for tidying up as I threw it in the paper recycling afterwards). I dyed a couple of pieces of card at the same time and achieved a better effect on the card than the fabric. If using this method again I’d use more dye and make more effort to create patterns in the shaving foam before placing my fabric down. 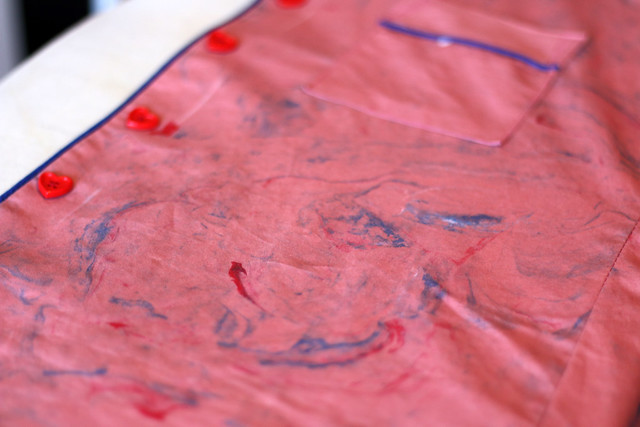 I cut a size 2 in the top and 6 in the shorts (which makes me sound very bottom heavy…) and the fit is perfect. I didn’t make any intentional changes to the pattern, although I did accidentally attach the collar upside down… By the time I noticed, I’d already attached piping, sewn the two sides of the collar together and partially attached it to the neckline, so I decided to just go with it, and luckily it works:)! 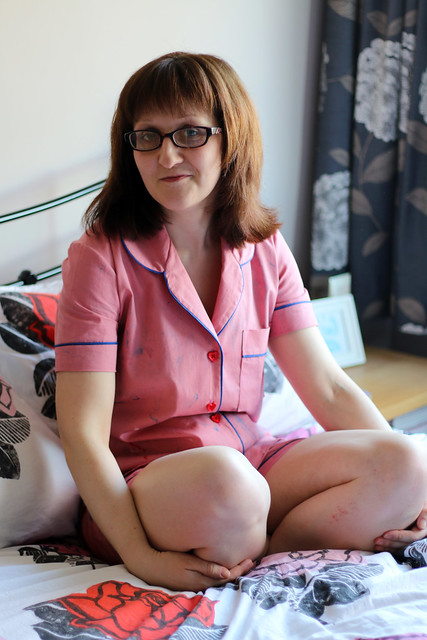 I abandoned my normal location of my garden for these photos as it seemed inconspicuous for pyjamas. These are taken in our bedroom, and in honour of this blog post I ironed the bed linen for the first time ever! This bed linen is worthy of ironing – it’s Designers Guild’s Ramblas, which is my all time favourite Designers Guild pattern (purchased cheaply from TK Maxx). 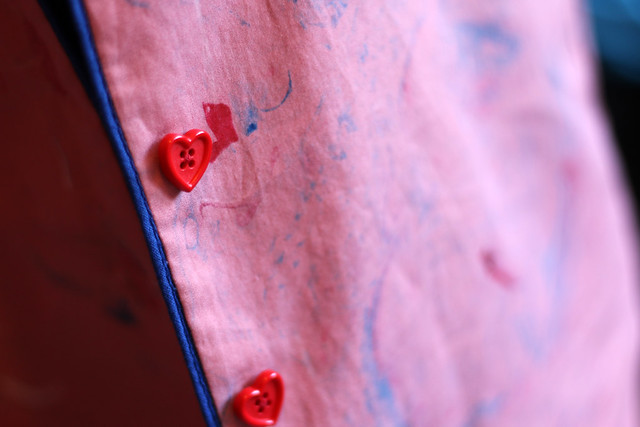 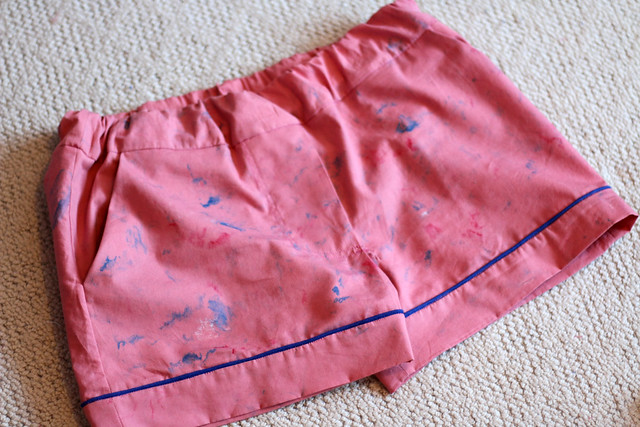 The piping was pre-made, from my stash and I had exactly the right amount for these pyjamas; so satisfying. I used boxer shorts elastic, from Guthrie & Ghani, in the waistband of my shorts, and the buttons are Cath Kidson, also from my stash. 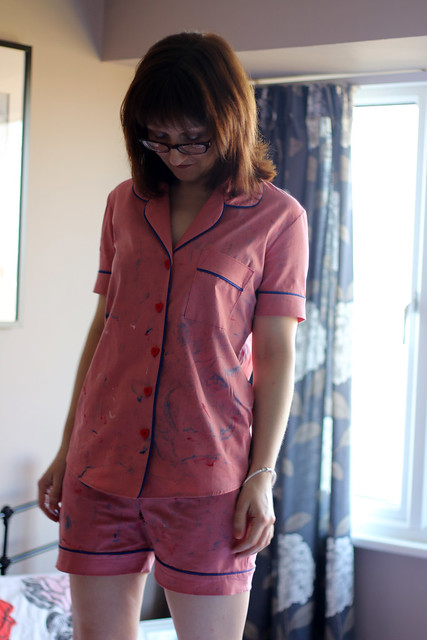 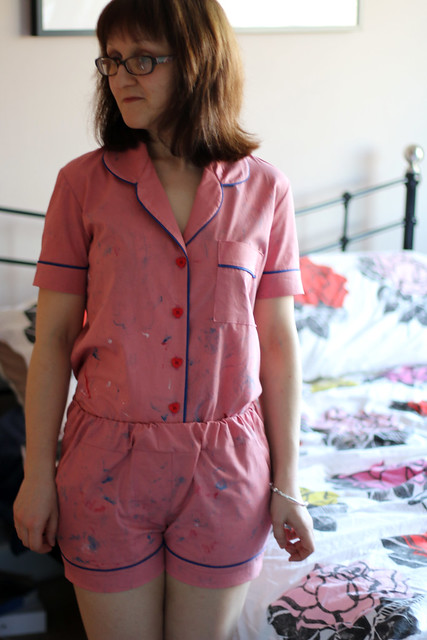