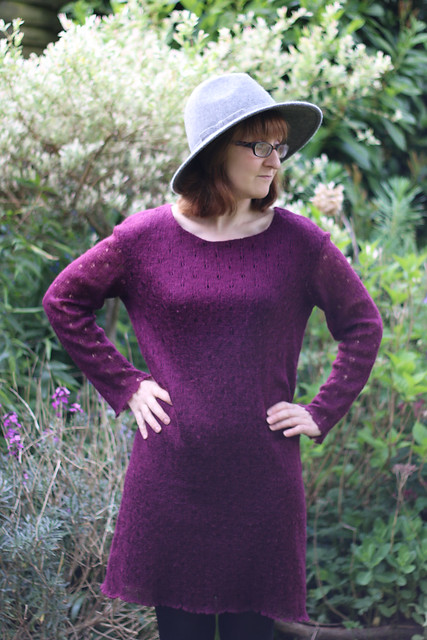 This post is a prime example of sewing blogger problems. The dress was a quick and easy sewing project, getting photos for a blog post, ridiculous difficult! 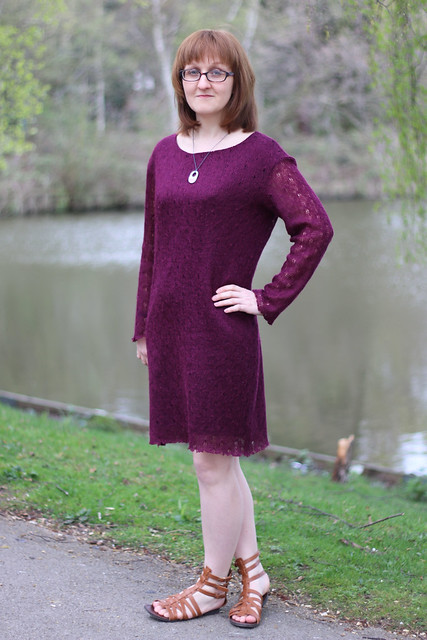 I originally took the camera out when me and Phil visited Resorts World shopping centre in Birmingham. We got some photos by the lake there, but every picture Phil took – with the exception of a couple included in this post – was blurry!

Phil and I rarely argue – the only things we ever argue about are whose turn it is to do a chore in the house (obviously, we each think we do more than the other), and blog photos! He hates taking them, and I think it requires very little effort given the amount of effort it takes me to sew a garment. 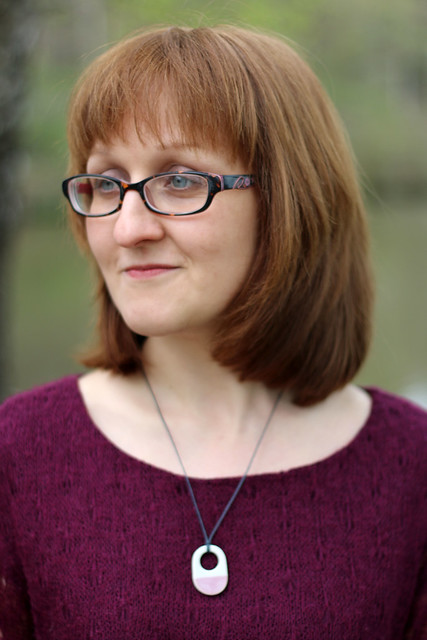 We tried taking further photos in the garden, but again almost every photo was blurry. I’m sure fellow bloggers will know the horror of realising that a photo which looks perfect – great photo of the garment, and no strange faces being pulled – is just out of focus. I can’t face a third attempt, so you’ll have to take my work that this dress is cuter in real life than in these photos! 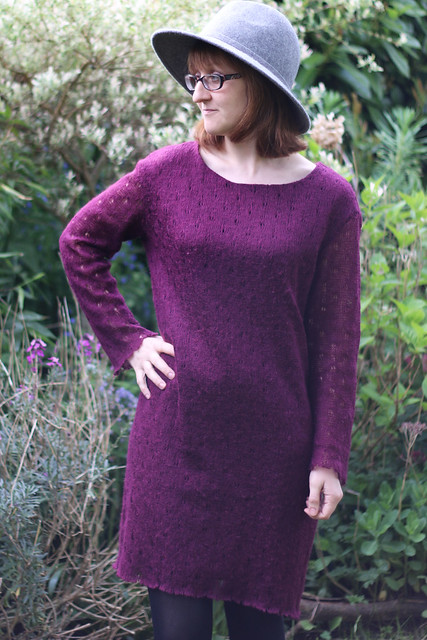 Having made Paprika Patterns Onyx Shirt twice before (previous versions 1 and 2), I thought it would be a good candidate for a dress hack. I also used the full length sleeve from the sleeve add-on pack.

To create a dress variation, I just extended the front and back pieces from the bottom of the pattern pieces down to the edge of my fabric, making sure to allow enough ease at the hips. 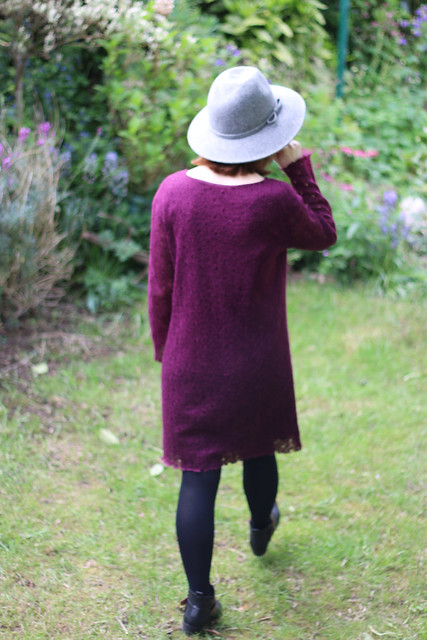 The fabric I used is lacy and not very strong, so to reinforce it (and for the purposes of decency) I also cut the front and back pieces in lining fabric. I constructed the lining separately and then attached it to the main fabric at the neckline. I left the sleeves unlined to make the lace effect more visible. As the lace fabric doesn’t fray, I left the sleeve and hem edges unfinished. 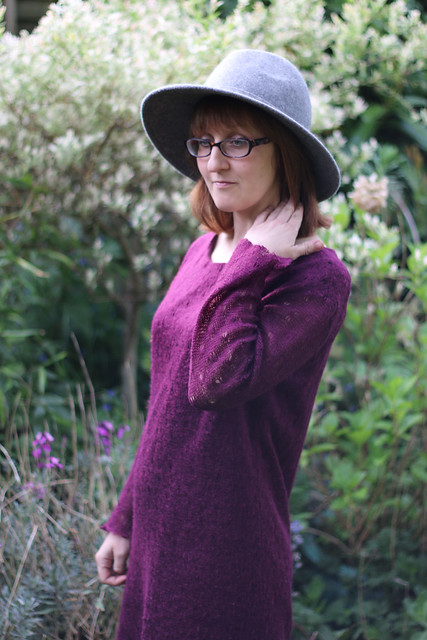 Suitably, I purchased this fabric (and the matching lining) as a coupon in Paris while shopping with Lisa of Paprika Patterns, Sabine, Carmen and Olivier. Olivier spotted it originally, but kindly let me buy it, and found me the matching lining in the same coupon bin! 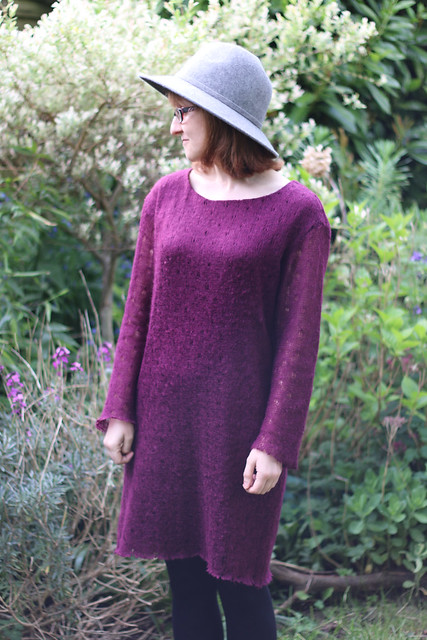 Making this has tempted me to make a couple more summery Onyx Shirts – perhaps in a crepe this time. 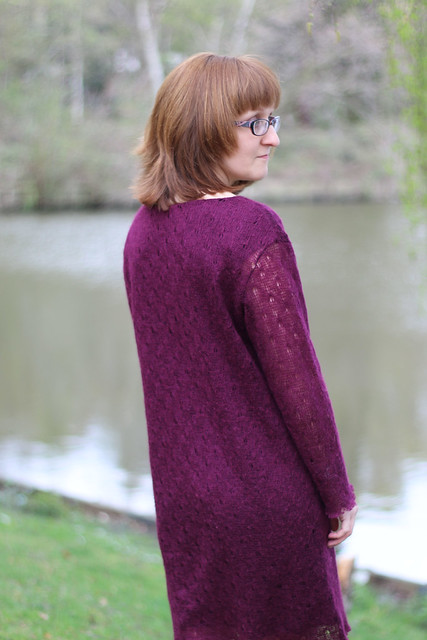 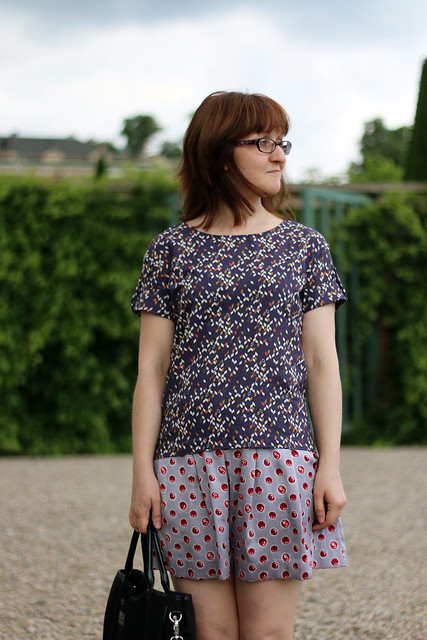 Yesterday, me and Phil arrived home from a week’s holiday in Berlin (plus a quick stop-over in London to attend a sewing meet-up organised by Helen). We had a great week, but it’s also lovely to be home – particularly as I have a few more days off work, so time to do some sewing, knitting and blogging. 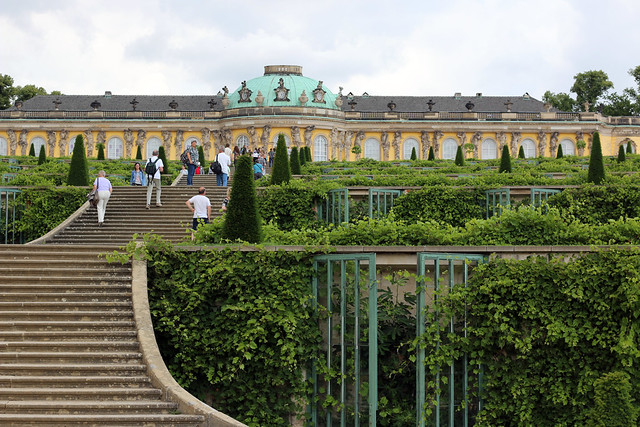 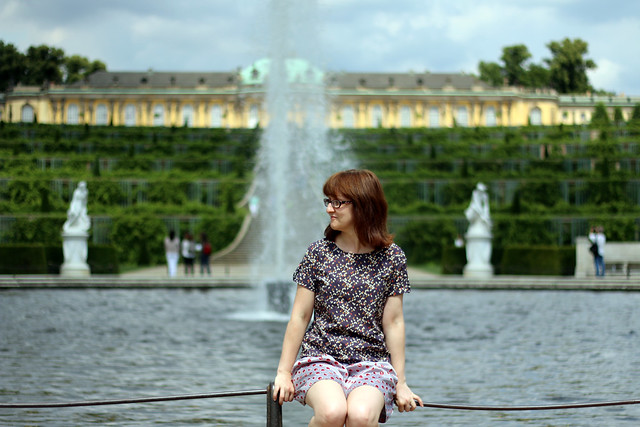 I only managed to make one new garment for the holiday, a second Onyx Shirt by Paprika Patterns. I started it a few days before we left, but inevitably ended up hand sewing the hem at midnight the day before we left. Sewing blogger problems… 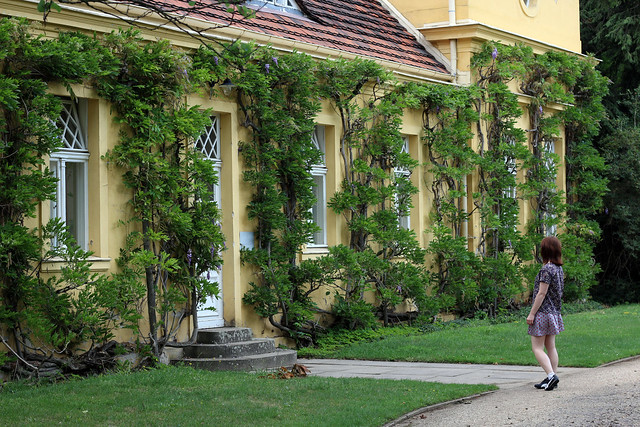 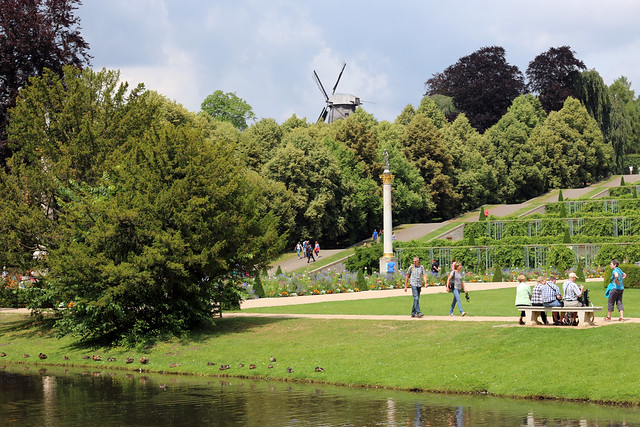 I made a straight size two. The only alteration I made from the instructions was to fold under twice at the neckline and hand stitch, rather than using bias binding. I also hand stitched the hem.

The fabric is Atelier Brunette cotton. It’s their ‘twist’ design in dark blue, and was purchased from Guthrie & Ghani. Buttons were from my stash, and I think were freebies with a magazine. 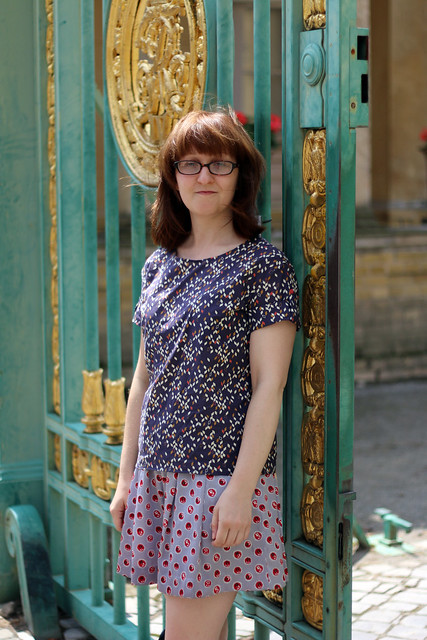 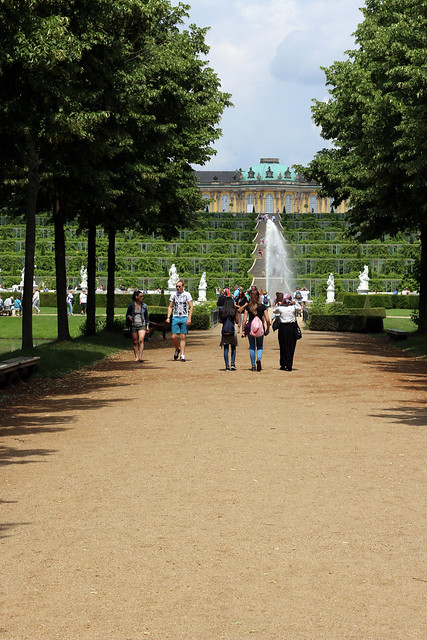 These photos were taken in Sanssouci Park in Potsdam. The Berlin travel ticket (if you buy all zones) includes Potsdam, so we decided to catch the train there one day during our trip. This is the area of the park in front of Sanssouci Palace, which was built as the summer palace of Frederick the Great. 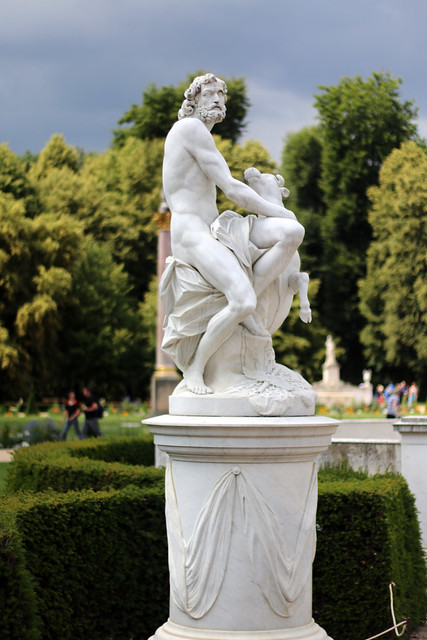 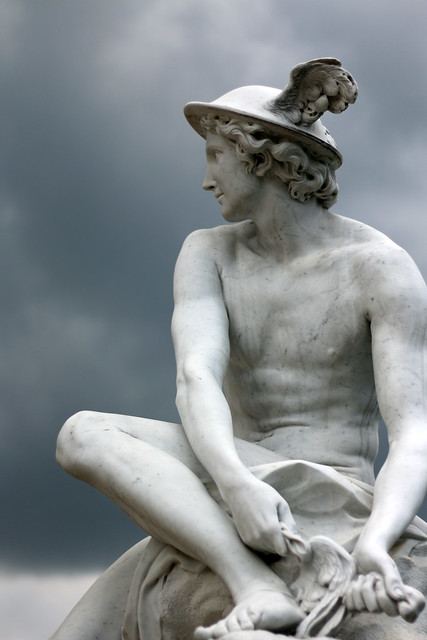 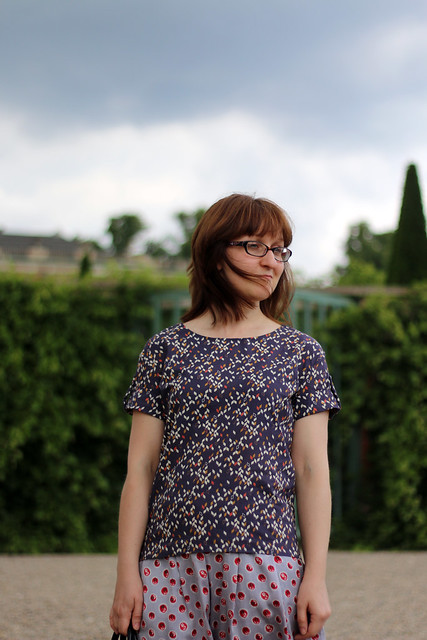 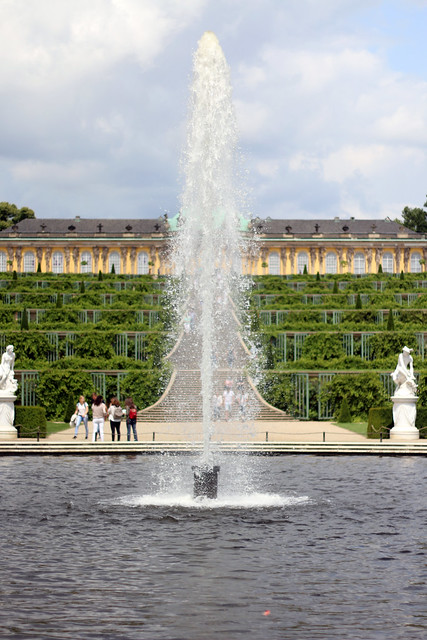 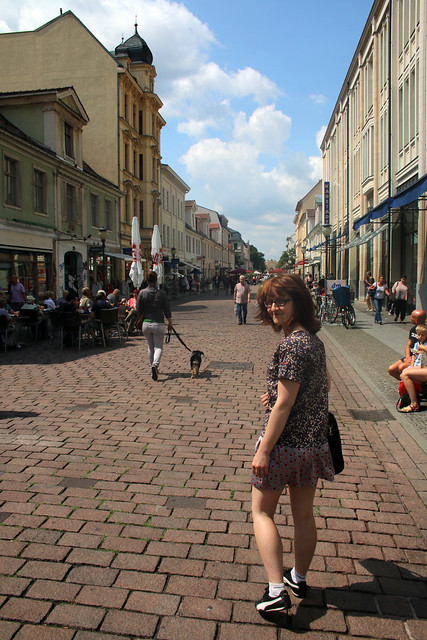 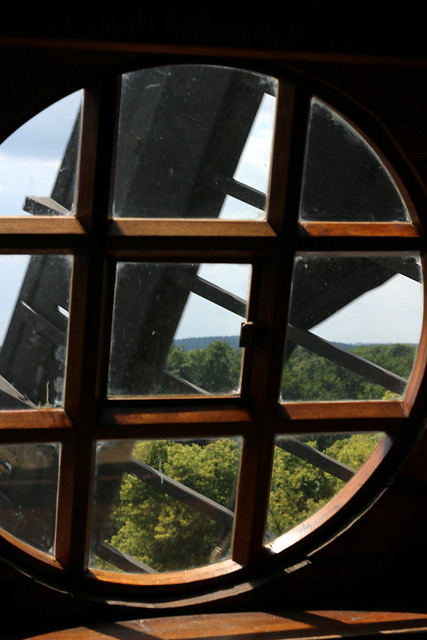