I’ve blogged about this dress previously but didn’t get any decent photos so thought it was worth another post. 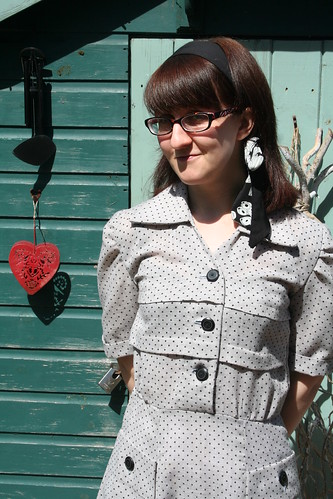 This was actually the first item of clothing I made, with the exception of the few things I made during Textiles class at school (I remember an awful fleece hat in particular…). I didn’t make things easy for myself by starting with an original 1940s Marian Martin sewing pattern (9049)! 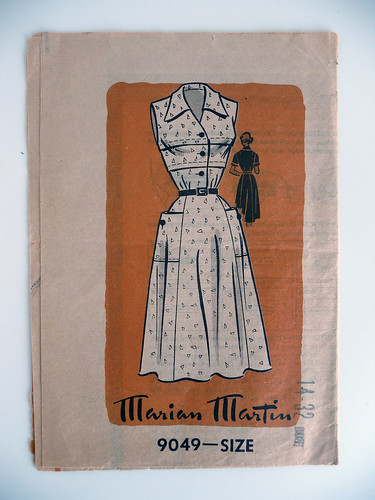 I made this dress while I was still at University studying for my undergraduate degree (BA English) approximately eight years ago, but pretty much never wore it as the original length (ankle length) didn’t really suit me. When I rediscovered the dress in the attic last year I lopped a big chunk off the skirt to get to the current length. Much more my style:) 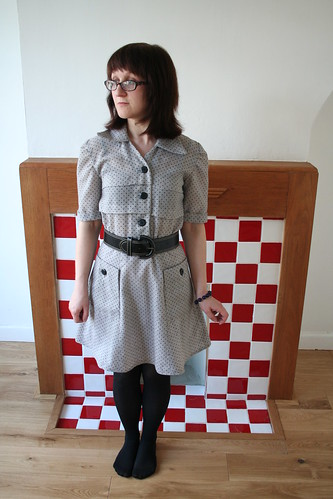 This week (spurred on by me made May) I finally got around to tidying up the hem and redoing the buttonholes (which were frankly awful, tut tut Charlotte of 8 years ago). Now I can finally get some wear out of my new-old dress! 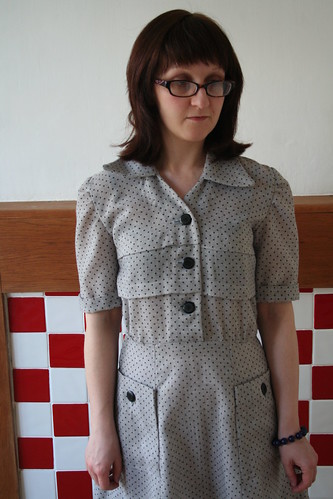 This dress is worn below with my Brigitte Scarf. It was a lovely day but was actually a bit bright so I got Phil to take some photos in the house too, which means you are seeing a few of each! 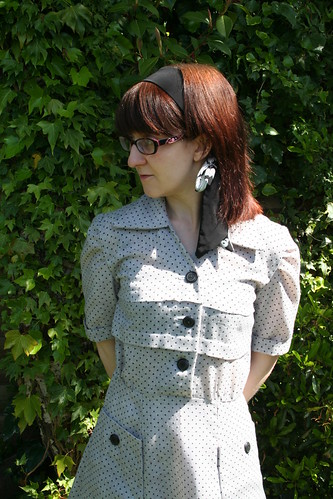 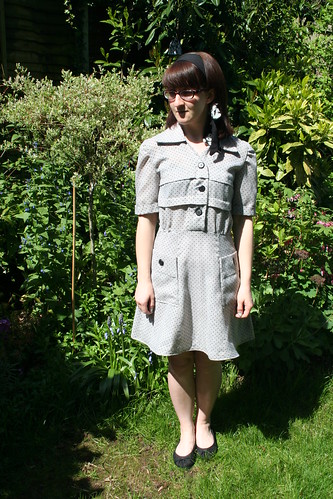 I made this dress from a 1940s Marian Martin sewing pattern (9049), bought on ebay, while I was still at University studying for my undergraduate degree (BA English as it happens). I love the large pockets on the skirt and the pleated bodice. I made version two with short sleeves.

According to the envelope that was included with the pattern, the original owner was a Mrs Goodwin of California.

It’s  now eight years since I finished University so the dress is at least eight years old, but I think I’ve only worn it once or twice. In fact, when I remembered it a few weeks ago and decided to try it on to see if it still fits I couldn’t even find it, as I’d left it behind at my Mom and Dad’s house when I moved out two years ago. Poor dress!

After trying it on I realised the problem. When I made the dress, I followed the pattern and instructions exactly. This meant the dress worked out at around ankle length. However, I’m quite short and have a preference for short skirts and dresses (I don’t normally wear anything longer than just-above-the-knee length), so I just didn’t feel comfortable in it.

This was easily fixed. I chopped 12″ off the bottom of the dress and then re-hemmed. The resulting short-skirt version is much more my style.

I also spotted a few issues with the finish of the dress. Eight years ago I was obviously lazier, and the button-holes and seams were pretty messy. I’ve started to tidy them up but didn’t finish in time for yesterday’s Birmingham meet-up organised by Marie, Kat and Claire. However, I decided to wear the dress anyway – after 8 years in the wardrobe I thought it was time to give it a decent outing.