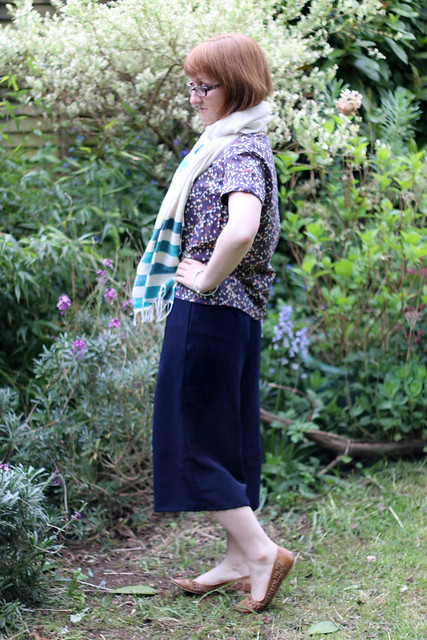 Woo hoo, The Great British Sewing Bee is back for series four! I won’t ask if you’re excited; I was on Twitter yesterday and my feed was full of GBSB chat:) I hope international friends get to watch it too (p.s. when I used to travel for work, I watched on iplayer live using a UK VPN). 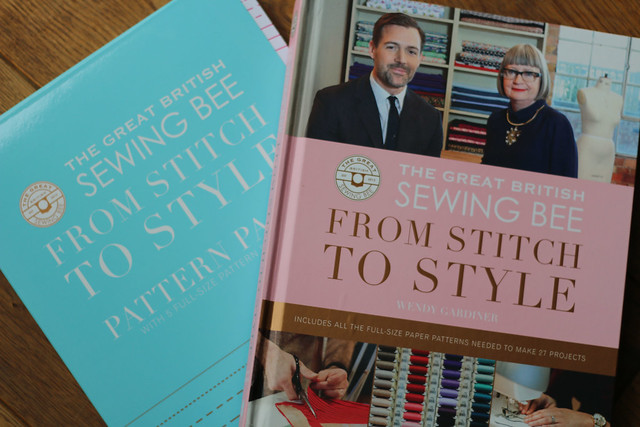 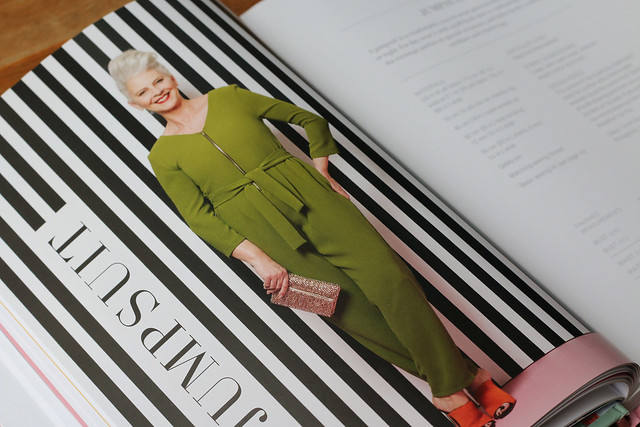 Alongside the new series, there’s also a new GBSB book by Wendy Gardiner. If you’re familiar with the previous series’ books, you’ll already be familiar with the format. The book starts with a ‘Know Before You Sew’ section, which contains a brief overview of sewing supplies, machines, fabric types, and the techniques used in the book. The introductory chapter also includes a short overview of common fitting techniques (including bust adjustments and trouser fitting), although you’d need to seek out additional advice in order to really get the hang of the techniques. 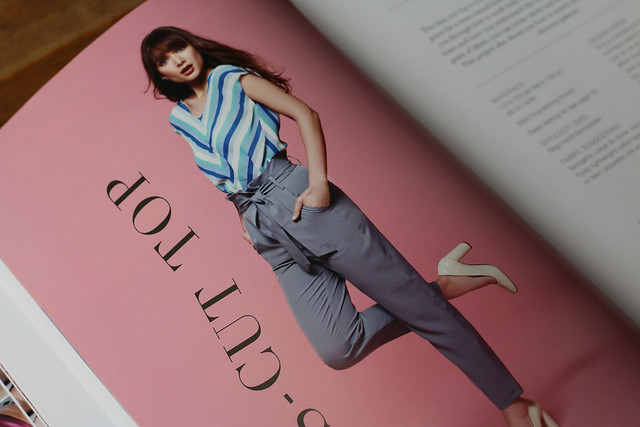 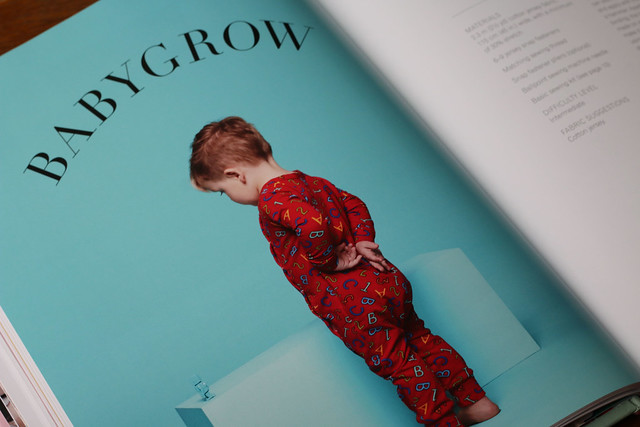 The majority of the book contains garment projects; there are 27 in total which are split as follows: 20 women’s; 2 men’s; 3 children’s; 1 baby; 1 unisex (kimono). I don’t have any insight into what the contestants will be making in future episodes of the series, but I think we can make some good guesses based on the book! The patterns include a range of basics including the bias-cut top made in episode one, a breton top, palazzo pants, peplum dress, wiggle skirt and camisole top and shorts. There are also some more unusual patterns such as a soft-cup bra (I’m looking forward to that episode!), asymmetric top and skirt, man’s cycling top, and a sequin cocktail dress. 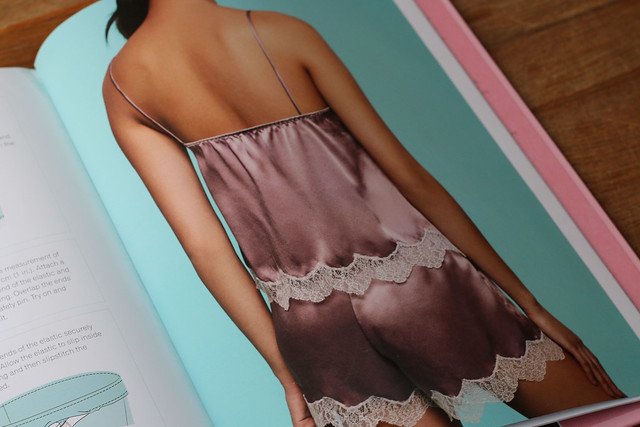 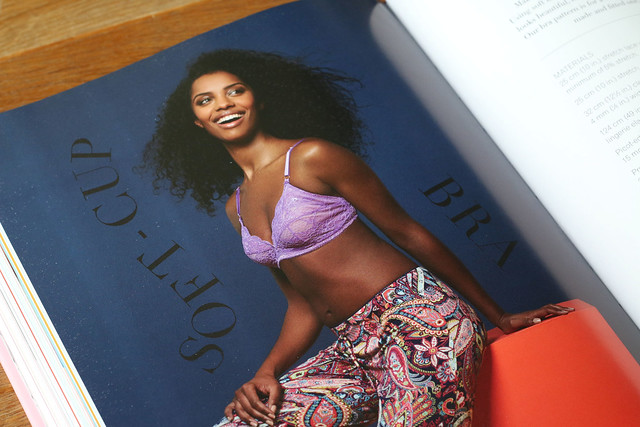 My favourite patterns from the book are the YSL-inspired Colour-Blocked Dress, and the Asymmetric Skirt. The children’s dungarees are adorable, and, although there are only two men’s patterns, they are both interesting choices – a cycle top, and a pin-tuck shirt. 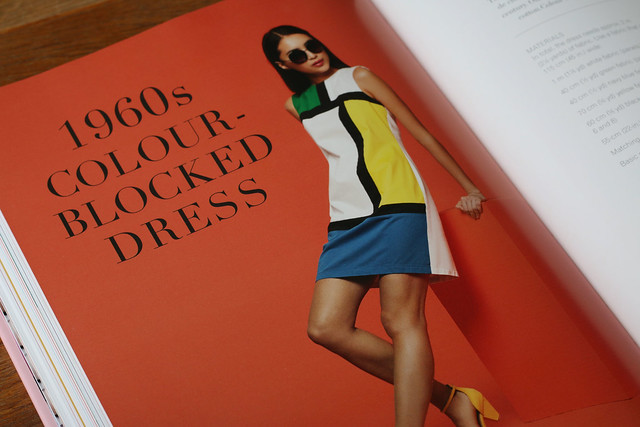 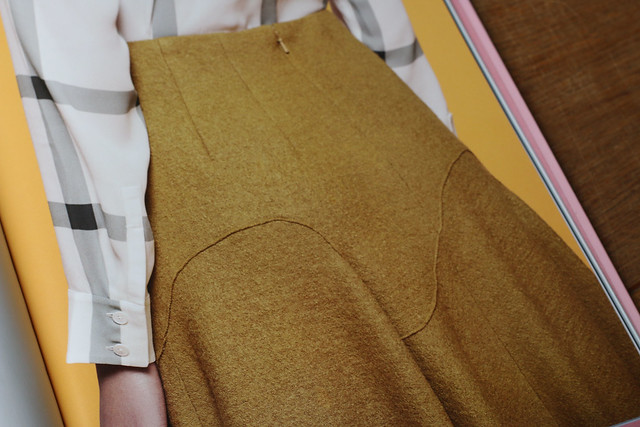 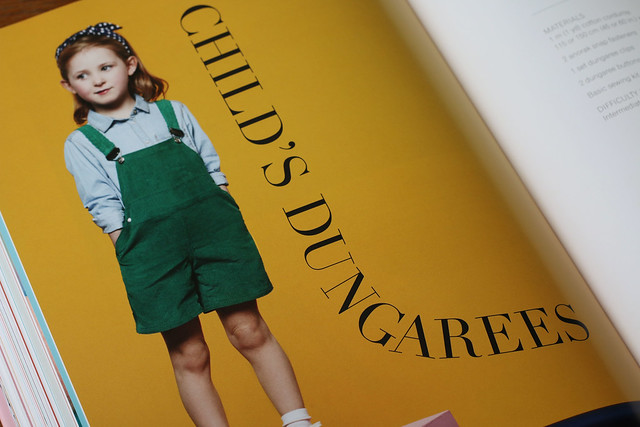 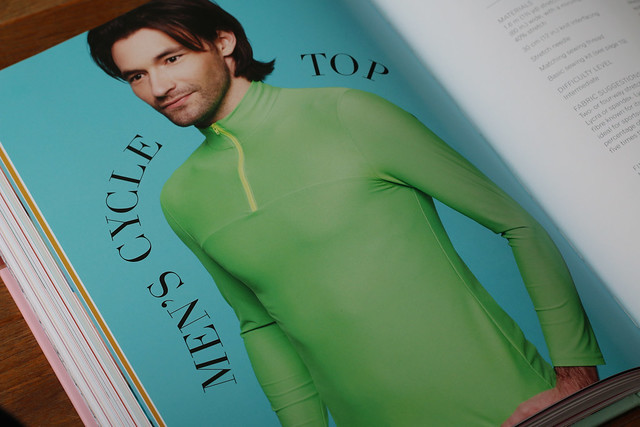 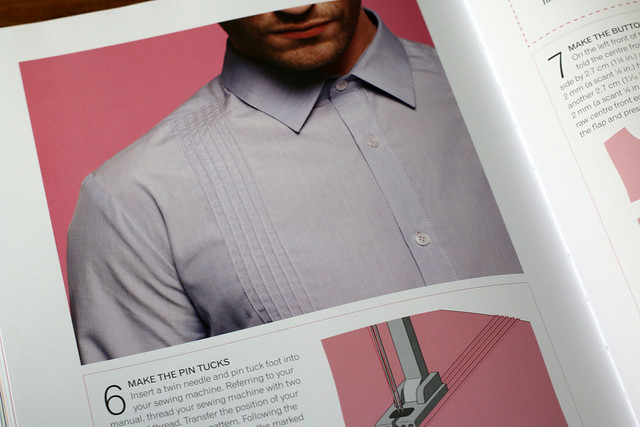 Full-size pattern pieces are provided on paper pattern sheets in a separate sleeve. Each sheet is labelled with which patterns it contains. Pattern pieces are overlapped, and can be a little fiddly to identify (Burda-style). Make sure to take note of the pattern piece name font colour on the sheet, as the pattern piece outline will be in the same colour – making it easier to identify. Although pattern pieces are full size, some are split in two parts on the sheet due to available space, requiring piecing-together when tracing. I noticed that a few patterns pieces were missing some information, but nothing too misleading (i.e for the Culottes pattern, the waistband piece was missing notches referred to in the instructions, and the pocket piece didn’t state how many pieces to cut). 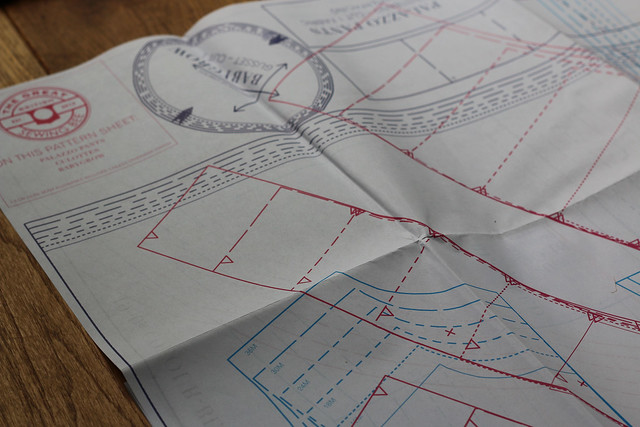 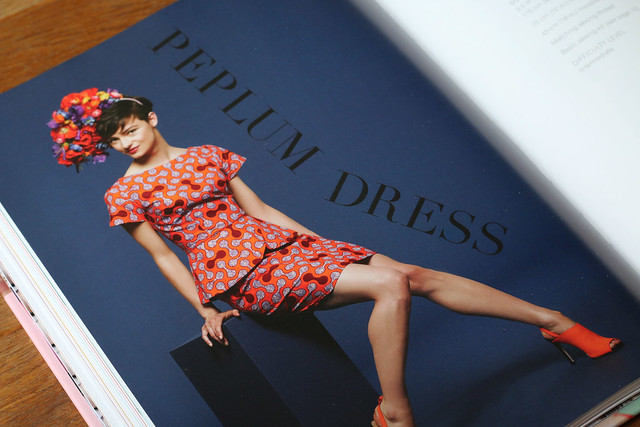 A number of patterns within the book are labelled as ‘hacks’ (e.g the Culottes are a hack of the Palazzo Pants pattern), but helpfully the pattern pieces include cutting lines for the hack variations, so there’s no need for sewers to manually hack the patterns themselves.

In order to try the book for myself, I made up the Culottes pattern (to my mind actually a short-trouser as opposed to culottes, but that’s a matter of opinion). 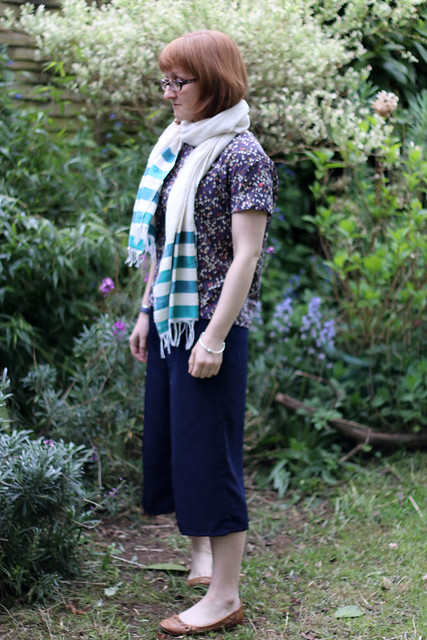 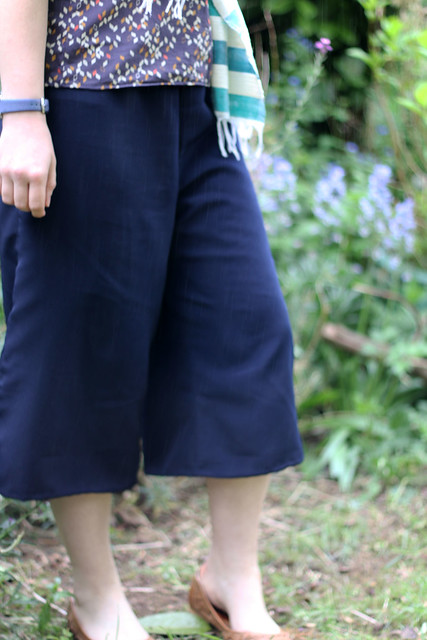 I found the sizing information in the book a little vague. The size chart at the start of the book (sizes 8-20; 32 1/2 – 45 1/2 bust) is labelled as ‘standard ready-to-wear women’s measurement chart’; I couldn’t see an explicit statement that the patterns in the book are based on that chart, although they appear to be. Each pattern has an individual ‘Finished Measurement’ sizing chart, but the amount of ease listed appears to be inaccurate in some instances (e.g. the jumpsuit pattern, which appears relatively fitted in the photo, states that it includes just under 10 inch ease at the bust, as does the Breton Top). 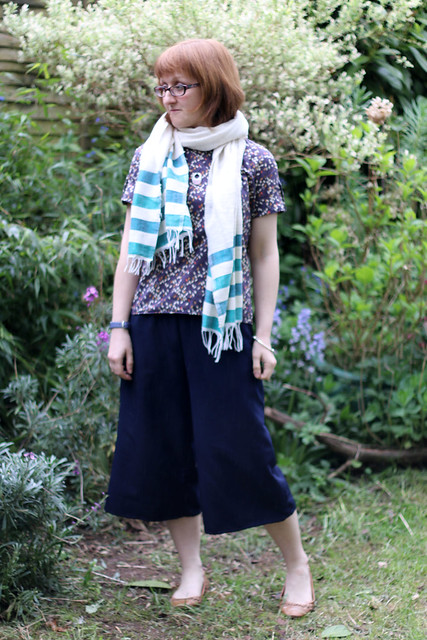 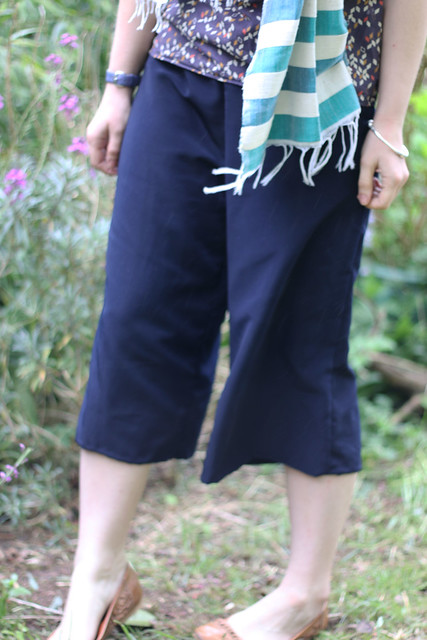 For the Culottes Pattern, for example, the overall sizing chart gives the Size 8 waist measurement as 65cm, while the finished measurement chart states the culottes have an 82cm waist (so 17cm ease). I measured the actual pattern pieces and found that the waistband measured 67cm (so a more standard 2cm ease). As such, I’d highly recommend checking the sizing charts, but then measuring the actual pattern pieces before cutting into your fabric.

Other than the sizing information, the Culottes went together easily following the illustrated step-by-step instructions. The only changes I made were to leave off the pocket (the pattern only includes a pocket at one side due to a side zip, which I thought would feel strange), and I gathered the trousers slightly in order to attach them to the waistband as there is quite a significant difference in the width of the trouser front/back pieces and the waistband. 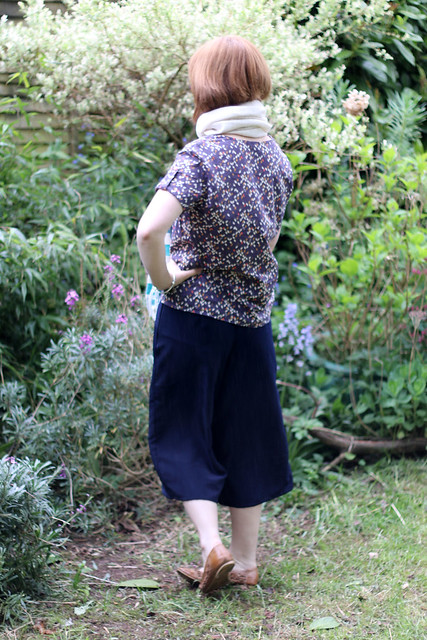 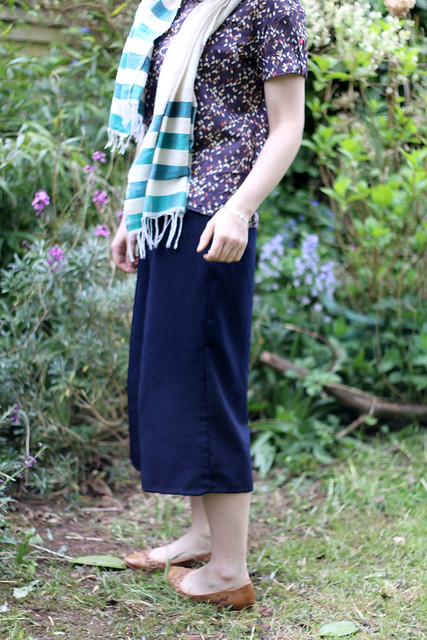 I wore these to work today and I think they’ll be a really useful addition to my wardrobe. The fabric is a navy peachskin polyester from new online fabric shop Adam Ross Fabrics, who are based local to me in Birmingham. The fabric has a lovely drape and is super soft; I want to get some more to make a dress.

I’m wearing the culottes in these photos with a Paprika Pattern Onyx Shirt, and a woven scarf from Sancho’s Dress, handwoven in Ethiopia on a wooden loom. 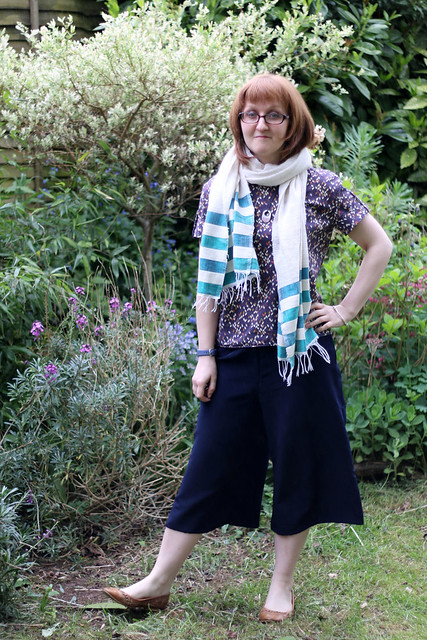 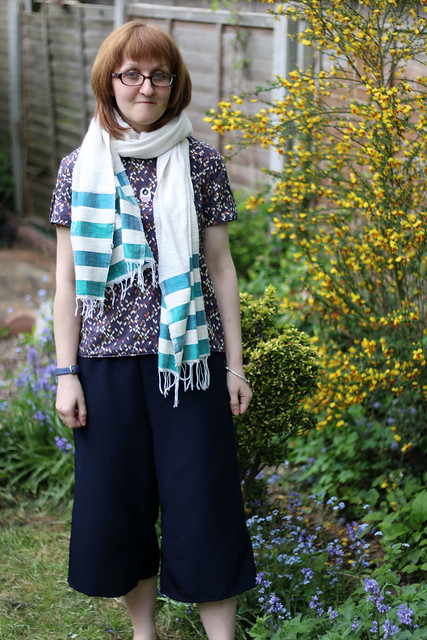 Don’t forget to read the rest of the posts on the Blog Tour:

MONDAY 16TH MAY
Made Peachy
Cut Out & Keep

TUESDAY 17TH MAY
English Girl at Home
The Sewing Directory

WEDNESDAY 18TH MAY
Sew Over It

FRIDAY 20TH MAY
By Hand London

SATURDAY 21ST MAY
A Stitching Odyssey

As a massive fan of the Great British Sewing Bee (it inspired me to start sewing clothes again after focusing on home-ware & toys for a few years) I cannot wait for the start of Series Two later this year! Even more exciting, Love Productions & BBC2 are already on the lookout for contestants for Series Three.

If you are based in the UK then this is your chance to be a GBSB contestant.  It’s your chance to get an up close look at that amazing sewing room & to show off your sewing skills (and no doubt learn a few more in the process).

To find out more contact Love Productions at sewing@loveproductions.co.uk. Make sure you apply before SUNDAY 16 MARCH 2014. Otherwise you’ll have to wait until Season Four;)

Yippee I’ve finished another project, a blouse with collar from the Great British Sewing Bee book. It’s a simple design with no fastenings and a false-collar (e.g. it’s just attached at the front of the blouse).

Keeping on a Sewing Bee theme, I made the blouse using a lovely Sevenberry printed cotton fabric which I bought from Guthrie & Ghani, the shop run by Sewing Bee’s Lauren.

I’m relatively happy with the blouse, although given that it isn’t fitted a more clingy fabric would have resulted in a closer fit.

There’s one other issue with it, I messed up the underarm area where the sleeves join the body. It’s probably due to my limited sewing skills, but I found the instructions for attaching the bottom of the sleeves to the body quite vague. By the time I’d finished attaching them with French seams I couldn’t face reattaching – especially since I wasn’t entirely sure where I went wrong – so I’m going to live with the errors. As long as I don’t hold my arms up in the air no one will know!

P.S. the unironed look isn’t entirely my fault as I did iron the blouse before putting it on, however the fabric creases pretty quick.

Talking about Guthrie and Ghani, me and Phil attended a Kino 10 short film screening at the shop last night. If you live in Birmingham make sure you check out Kino 10, who run short-film screenings across the city in galleries, pubs, shops, etc.

Last night’s screening was on the theme of crafting, sewing and knitting. The best film shown was To Die By Your Side by Spike Jonze. It’s a stop motion animation in fabric. It’s also a love story set in a Parisian book shop. Check it out.

Knitting fans (and everyone else) may also enjoy another video we watched last night. The doozer’s Knitting Song from Fraggle Rock.

My own favourite sewing/clothing related shorts are the old newsreel footage clips, like the one below…

This morning, me and my Mom attended the grand opening of Guthrie & Ghani (a new haberdashery in Moseley, Birmingham) run by Lauren of Great British Sewing Bee fame.

We arrived in time for the ribbon cutting, along with lots of others. There was quite a crowd waiting for the doors to open & there was still a queue outside  when we left (which was quite some time later as we had a good mooch!). Lauren looked a little nervous when the moment to cut the ribbon arrived, but was supported by Stuart (fellow star of Sewing Bee) and her husband, Ayaz.

The Guthrie & Ghani team were very welcoming, making for a really lovely opening event. Lauren’s fellow stars of Sewing Bee, Tilly and Stuart (who will both be teaching classes in the shop’s upstairs workroom) attended and were happy to sign copies of the Sewing Bee book and talk sewing. It was great to meet them all, and they were just as nice in person as they seemed on TV. My Mom treated herself to the Sewing Bee book, which I will be borrowing shortly:)

Of course I also loved the products available:) The shop’s stock is beautifully displayed and very colourful. I restricted myself to a lovely purse clasp (with yellow bobbles) but will be returning shortly for a Colette pattern and am planning to attend a workshop. I just haven’t decided which I fancy most yet…