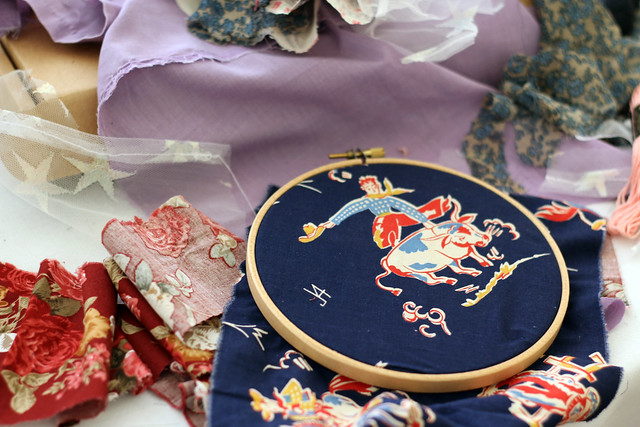 Happily, I have a few crafty weekends lined up at the moment. Two weeks ago I met up with friends on Sunday for knit and natter, this weekend I’m going to a dyer’s picnic event with my WSD guild where we’ll try a range of natural and acic dyes, and last weekend I attended a Creative and Crafty Bloggers (#CCBloggers) meet-up.

This is the second #CCBloggers meet-up I’ve attended, and they are meticulously organised by Sam and Kat. Sam and Kat are based in Derby, so meet-ups are held in the Derby / Nottingham area. This meet-up was held in a really special venue, Breadsall Priory. 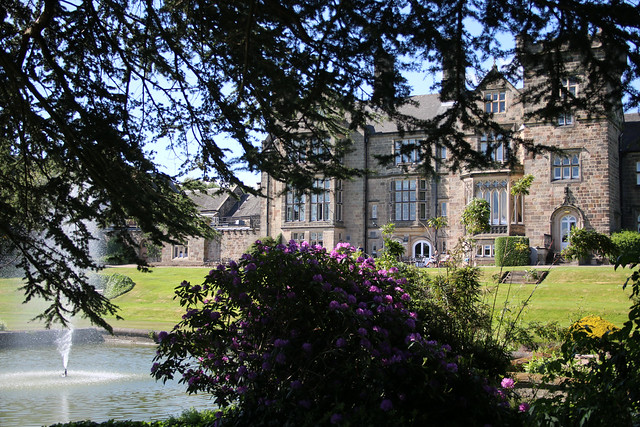 The original Breadsall Priory was a small Augustinian priory, established before 1266, which housed two or three priests. The current building, which is a Marriott Hotel, was originally built as a private home on the same site in the 16th century.

It’s a beautiful venue, surrounded by gardens and a golf course, and was an amazing place to spend a sunny Sunday. We were lucky enough to receive spa passes so I’ll be heading back in the near future. 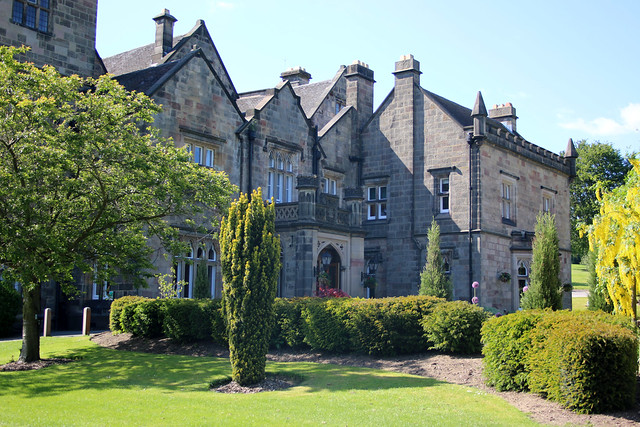 The #CCBloggers meet-ups differ from other meet-ups I attend because they include local bloggers with a wide range of different craft interests and blogging styles. While I can never resist a chance to talk sewing (and now knitting) with other sewists, it’s also great to meet bloggers with different interests, and who are part of different online groups and circles. 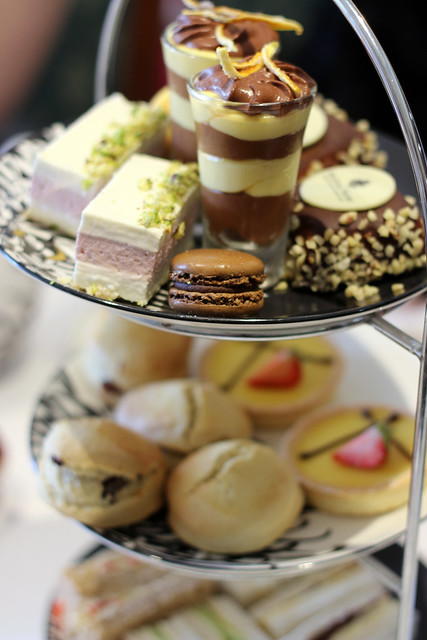 Our chatting was facilitated by a lovely afternoon tea, accompanied by raspberry ginger beers and bellinis. 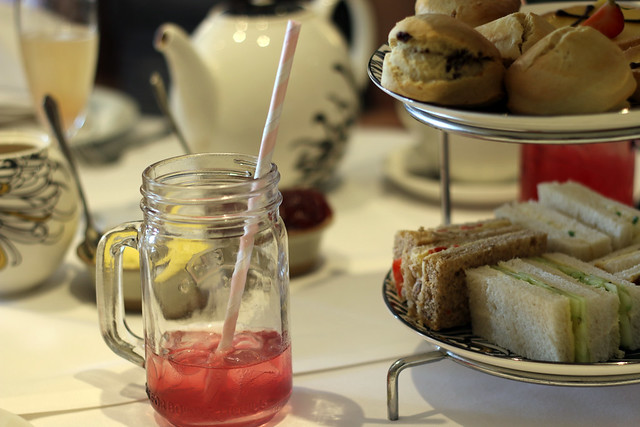 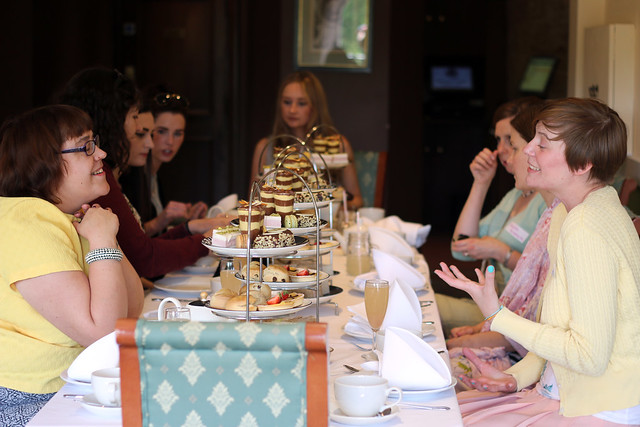 The #CCBloggers meet-ups focus on giving attendees time to chat and network, to take part in crafts, and to learn from others. The meet-up was part of the Etsy Craft Party global event, so we took part in a range of crafts inspired by the craft party theme: colour, kaleidoscope and paper. 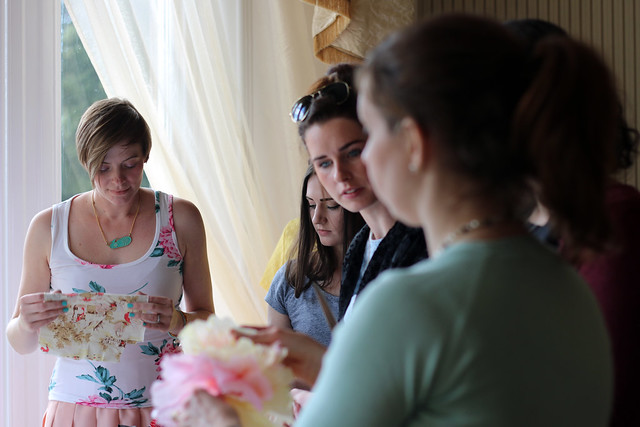 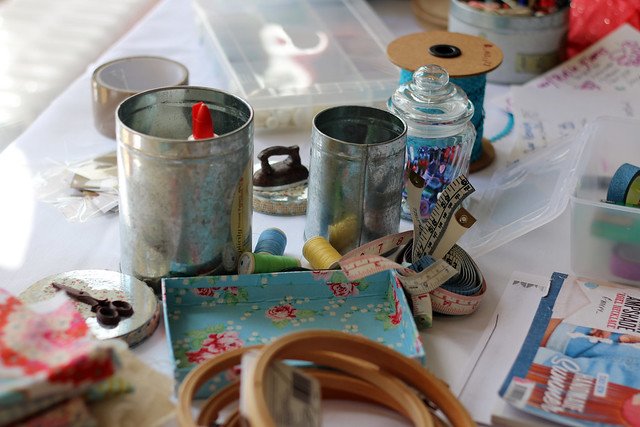 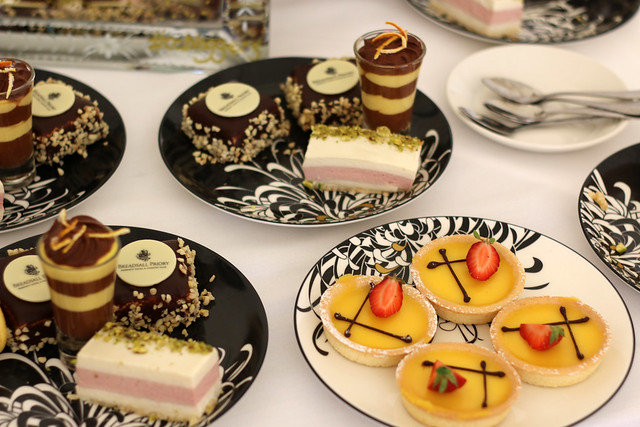 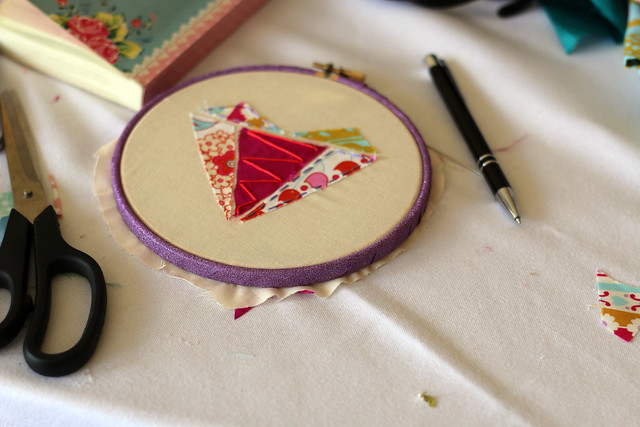 We also got the chance to try out products from organic beauty company Weleda, and paint company Polyvine, and to learn more about the Derby-based businesses/projects of two attendees, Lunar21, described as Derby’s ‘non-political think-tank’ and the Bless your Arts boutique. 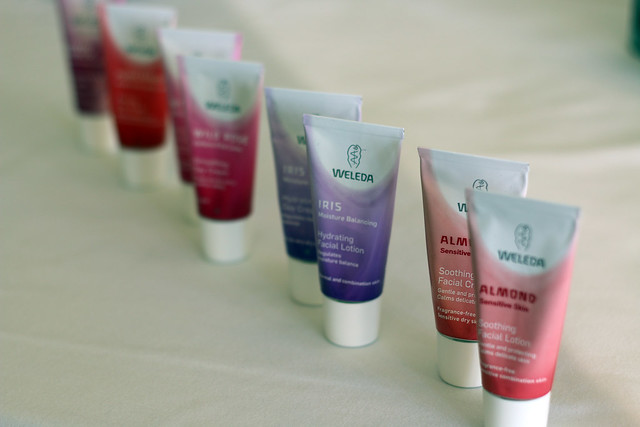 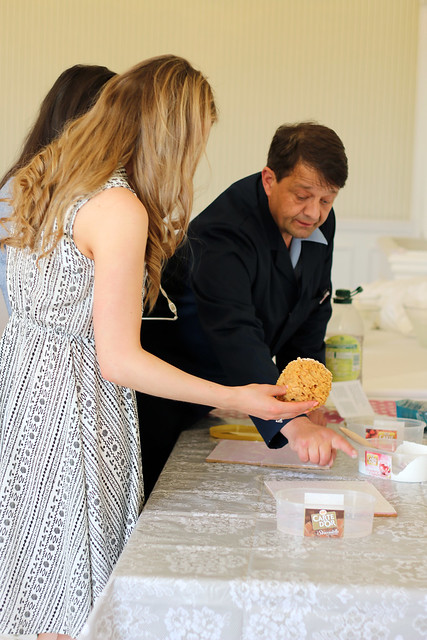 Everyone went away with overflowing goody bags. Mine included aloe vera scented cotton yarn that I’m intrigued to try out. Apparently the scent is released as you knit, which sounds very soothing! The embroidery hoop contains my unfinished craft project from the day. 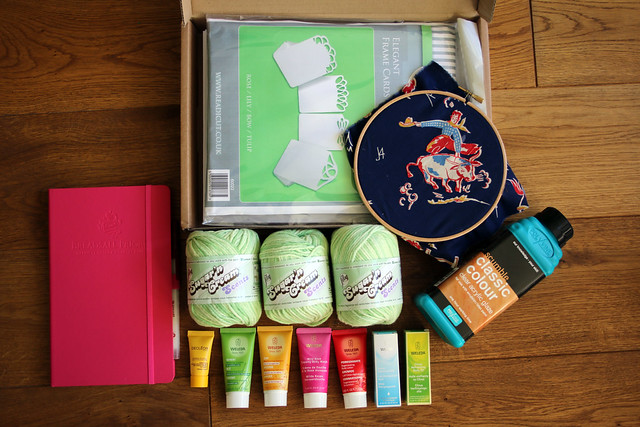 Each attendee contributed a gift for a swap – the idea being that you provided a ‘kit’ to inspire the recipient to get crafting. I received an envelope of colourful paper supplies from Emma. 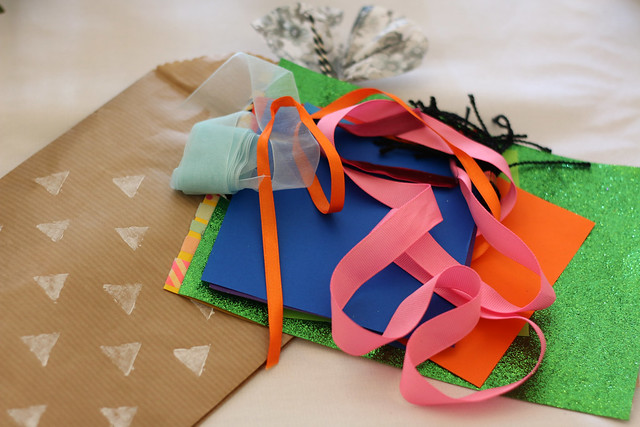 The event also raised £100 for Mollie Makes Crafternoon For Comic Relief. Roll-on the next meet-up! 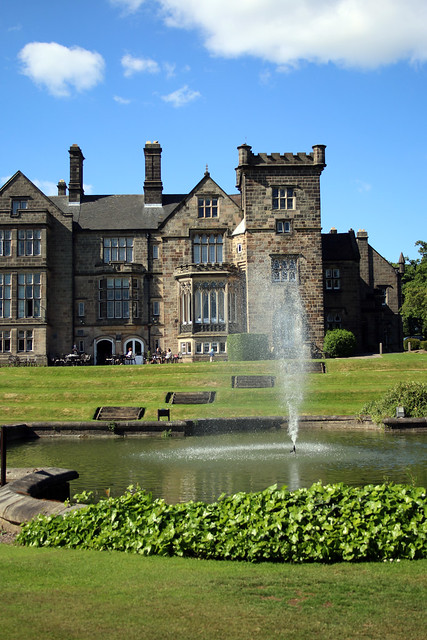 Last Saturday I attended a Creative and Crafty Bloggers meet in Derby. This was the first meet-up I’ve attended since SewBrum and it was very nice to just turn up & enjoy the day, with no organising to do! #ccbloggers is a Midlands-based group for creative bloggers, organised by Sam and Kat. Attendees at the Derby meet-up had pretty diverse interests and blogs, including quilting, jewellery, paper craft, party and event styling, textile product design, and – of course – sewing! 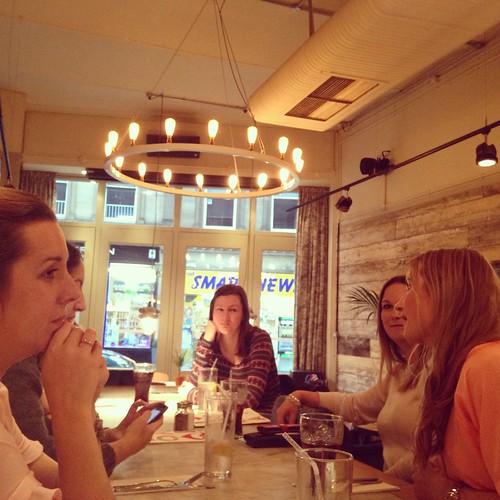 Sam and Kat had arranged some really interesting activities for the meet-up. After copious amounts of tea and toast at the very nice Bean Cafe, we were joined over lunch by social media guru Kaye who answered our many questions. 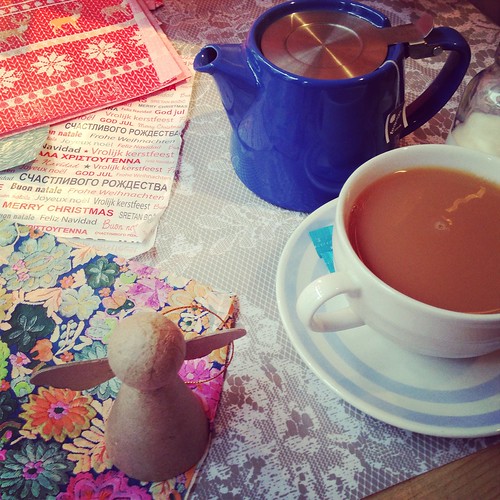 After lunch, we enjoyed a decopatch session and got in the Christmas spirit (I’m totally there) making tree decorations. We then visited the (brand new) studio of photographer Holly Booth. Holly was lovely & can do product photography via post as well as in person – most tempting… 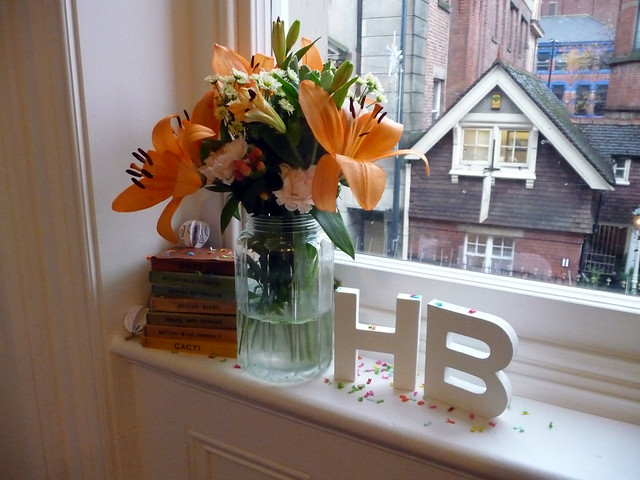 At the end of the day we squeezed in a little shopping in some of Derby’s independent shops. I was really impressed by the gorgeous little indie shops we visited. I live in Birmingham and love Birmingham city centre, but Birmingham isn’t a great city for independent shops (although it does have amazing independent fabric shops luckily).

We all left with a very nice goodie bag of freebies! 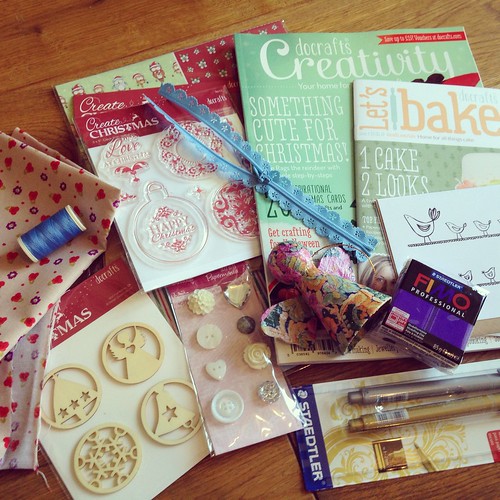 I’m looking forward to the next #CCBloggers meet-up and catching up with the bloggers below again soon.