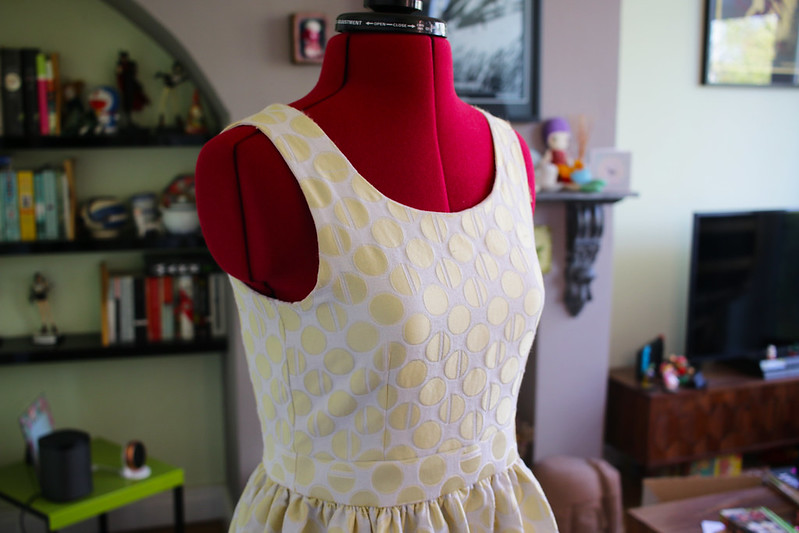 We’ve been working our way through the house since social distancing began, cleaning and sorting through the contents of all of the drawers and cupboards. Inevitably, I finally reached the baskets containing my UFOs and repairs.

I’m aiming to work my way through the baskets over the next few weeks. I’ve set myself the same goal before, with largely the same contents of the baskets, but with more time at home perhaps I’ll be more successful this attempt? There’s always going to need to be a UFOs basket, but it would be good to empty it and start fresh. 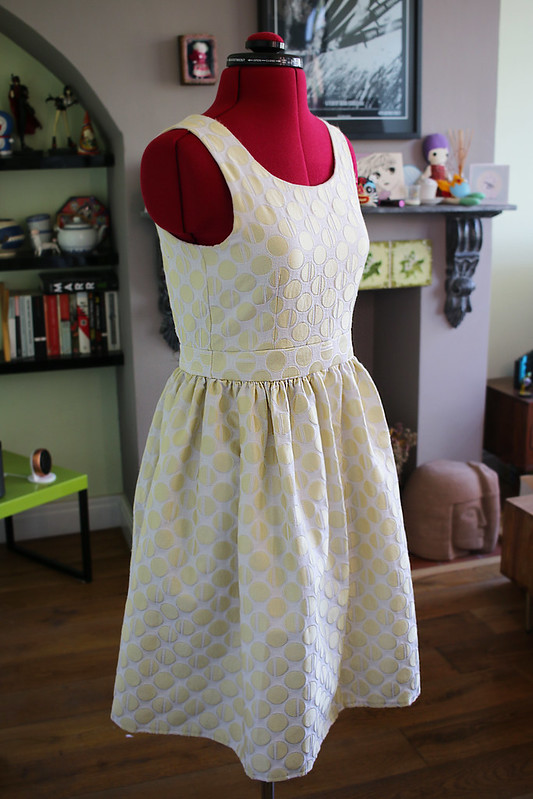 This dress was the first project I pulled out of the basket. It’s a Simple Sew Grace Dress, which I originally blogged in 2017. I made this dress in a hurry to wear to an event, the fabric frays easily and I was planning to revisit it to stabilise the seams before washing or wearing it again. Unfortunately it accidentally got thrown in the washing machine and emerged with holes along the centre seam.

I carried out a panicky repair job, overlocking everything in sight. In my rush to repair it I did a terrible job of gathering the skirt (which is a bit heavy to gather well), and the waistband was still quite damaged. I wore it a few times (including in those previous blog photos), but then it went it to the repairs basket. 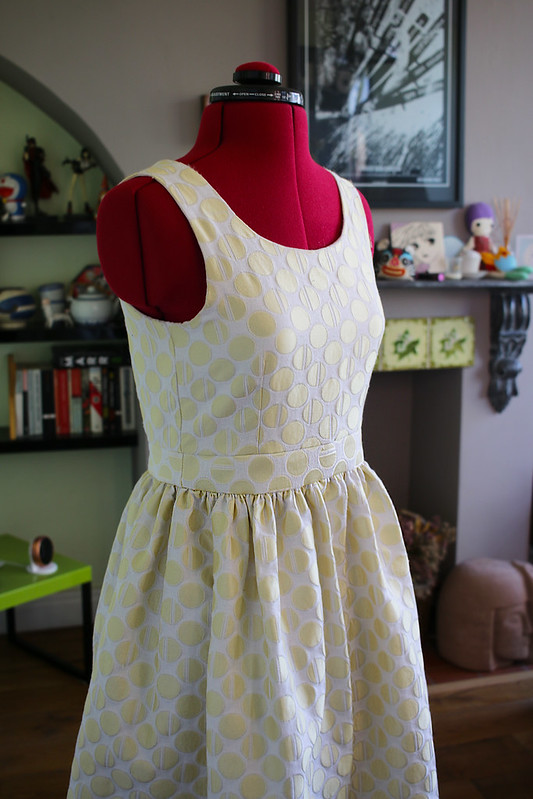 Yesterday I found out a remnant of the fabric I used to sew the dress (which was a gift from Madalynne through a giveaway on her blog), and recut a new waistband. I also regathered and attached the skirt.

It looks so much better now. The only downside is that the dress is now too tight to be comfortable. Partly as a result of me gaining weight since I originally made it, and partly because I was careful to stabilise the waistband this time around, via a combination of underlining and lining.

So, I’ll be revisiting this dress again later today, to see if I can eek out enough ease by reducing the seam allowance at the zip to add this back into my wardrobe this summer. 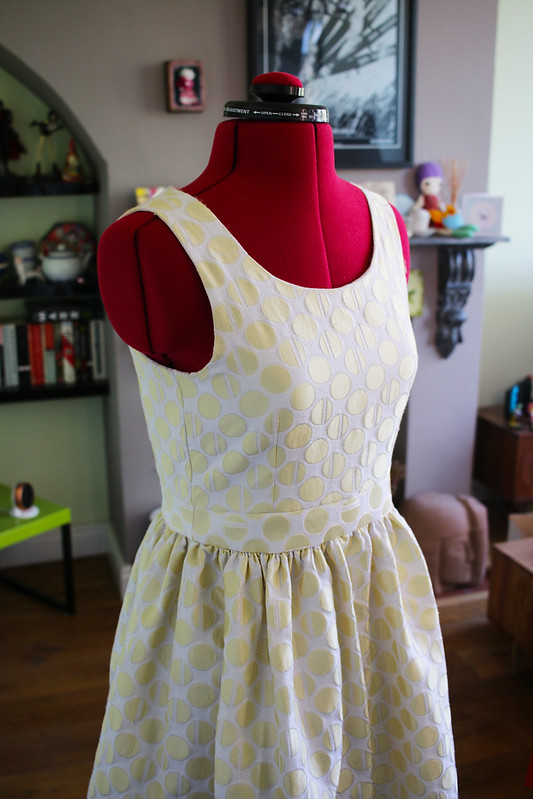 For the first Dressmakers’ Ball, organised by the team at Crafty Sew & So in Leicester, back in 2017, I left making my dress until the very last minute and ended up sewing a knit dress the night before the ball.

This year I was determined to be organised, and finished my dress with so much time to spare that I ended up making a matching belt, pill box hat, and bag (which collectively won me an award on the night for best accessory!).

The dress is Charm Patterns Night and Day Dress. I have the PDF version of the pattern (a gift from my parents for Christmas) and sent it for A0 printing as the pattern has many variations (including some very full skirts) so is enormous. I printed all of the pages as I’m keen to try some other variations in the near future. The version of the dress I made for the ball was actually decided by my fabric choice.

I was visiting New York – and attending Male Pattern Boldness Day – the month before the Ball, so decided to buy fabric for the dress at the meet-up. I was planning to get something drapey to make the bishop sleeved version of the Night & Day Dress, but once I spotted this double-sided metallic brocade in Metro Textiles I was sold.

Having had pretty consistent body measurements since my twenties, if not before, I’ve increased a few inches in the bust and waist recently. On a few recent projects I’ve cut out on autopilot based on the size I’m used to cutting (and gotten away with it), but for this project I was determined that I wasn’t going to skimp on any steps to a well fitting dress. I measured myself and cut the correct size, only to find, when I tried the work-in-progress bodice on, that it was too large. I took the bodice apart and cut the pieces down a size (to a 4 in the bust and 6 in the waist to hips, the size I would have cut on autopilot) and the fit was just right. I’ve since bought Gertie’s new book, Gertie Sews Jiffy Dresses, which uses the same sizes/block as Charm patterns, and Gertie notes in the introduction that the sizes are generous in the bust and hip.

I should say that I don’t bother with muslins/toiles, so although I always hope patterns will fit first go, I’m always expecting to need to make changes. Personally I prefer to make alterations to a sewing project as I go, in this way, and regularly do. I find that approach works much better for me, and I’m very rarely left with an unsalvagable project.

After making the dress, I felt that the pattern needed breaking up at the waist so I made a matching belt, using the reverse side of the brocade. I couldn’t find any belt buckles for sale locally in Birmingham, and hadn’t left myself long enough to risk ordering one online. I popped into H&M in the hope of finding something suitable and found an ugly fake leather belt on sale for £3. I cut my fabric based on the width of the buckle (not the belt I removed, which was much wider & horribly bunched up), and punched through some Prym eyelets for belt holes.

Next I started on a hat. I have a couple of hat making books I picked up cheaply years ago and hadn’t yet made anything from. This pill box hat was based on a design in Saturday Night Hat. The book instructions are based on using millinery supplies, but I walked to Fancy Silk Store one lunch break and asked for the closest they had to double buckram. The material I bought feels quite plasticky and is impossible to sew through, so it works to provide a firm structure but is more of a faff than an actual double buckram would be (I assume). The base of the hat is a circle (for the top) and a rectangle (for the sides) which I managed to attach together (the material also resisted all attempted to glue it) by punching holes along the edges of the top and sides, and sewing the pieces together through these holes. The hat is then covered in fabric pieces, which are sewn to each other. Finally, I punched Prym eyelets on either side and threaded elastic through. It’s worn behind my ears / under my hair.

The hat pictured here isn’t actually the version worn at the ball. This is a replacement pill box, as the first was ‘stolen’! The day after the ball, Phil and I were having a wander around Leicester. I was carrying the pill box hat in a plastic bag (along with a cheap comb and a sewing kit) to avoid squashing it in our very full suitcase, and accidentally left the bag unattended for ten minutes in McDonalds. We dashed back to find it but it was already gone! This second version is better constructed than the first, so I’m thinking of the lost one as a rare (for me) toile!

Finally, the night before the ball, I decided to whip up a matching bag. This bag was based on a pattern included with a recent issue of Simply Sewing magazine (issue 54). I didn’t have time to create/order a strap, so borrowed one from one of my handbags, and I finished hand-sewing the inside of the bag on the train to the ball (in good company, travelling with the lovely Sue).

The Dressmakers’ Ball was a really fun evening and a great incentive to make a more glamorous dress and a plethora of accessories. I believe Crafty Sew & So are planning to hold the ball every other year, and I’m thinking next time I need to take the word ‘ball’ to heart and create something really dramatic. 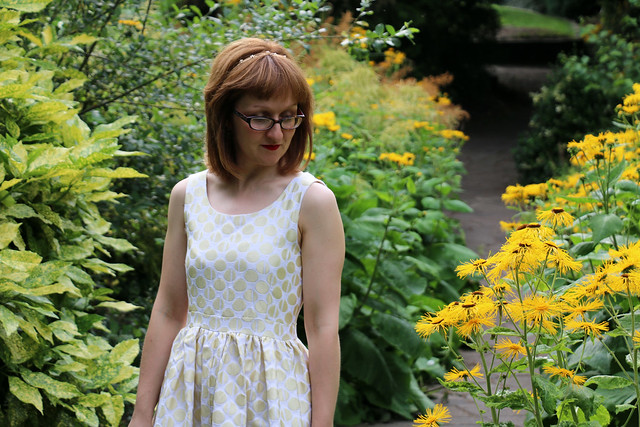 This is the Simple Sew Patterns Grace Dress, which was a freebie with a previous issue of Love Sewing Magazine. 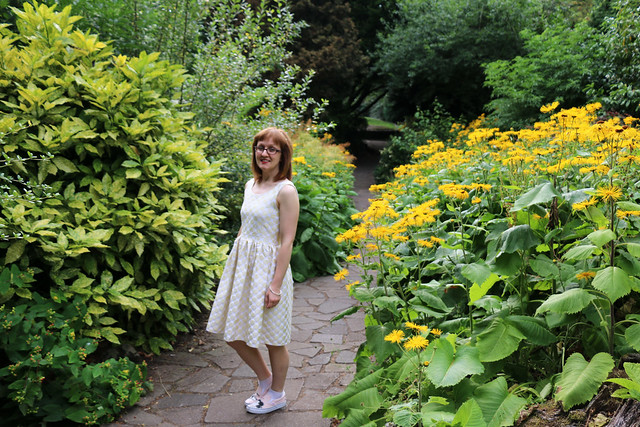 I’m currently very fond of this dress for a few reasons. Firstly, I made it using a yellow and white cotton/polyester brocade which I won in a little giveaway on Madalynne’s blog. The piece I won was leftover from an adorable two piece set Madalynne made, and which she recently revised in a blog post. 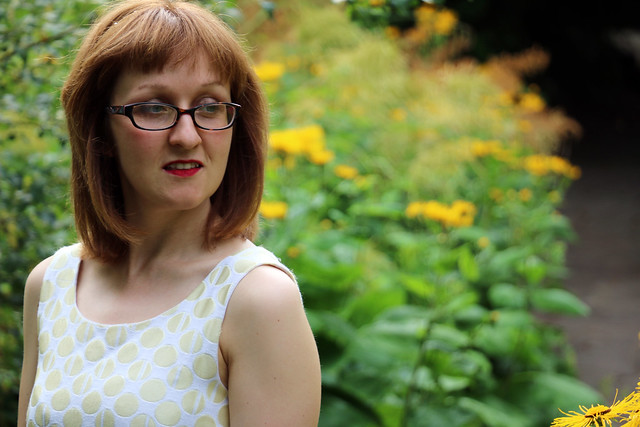 Secondly, I made it especially for a fun little overnight trip to London some months back, and wore it out to party. In typical fashion, I decided to make it for the trip at the last minute, and – from memory – sewed it mostly in one evening. Which leads me on to… 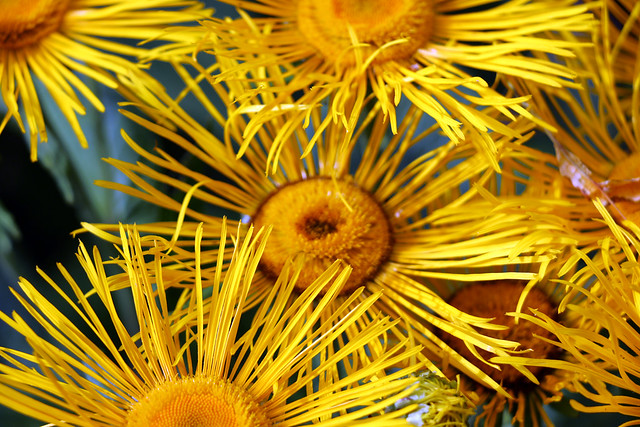 Thirdly, this dress was brought back from the brink, and given a second chance to live a fulfilling garmenty life. I didn’t realise until I had almost finished making this dress, that the fabric is quite delicate and frays significantly. My overlocker happened to be playing up at the time, and I was attempting to finish it quick to wear out, so I make the decision to wear it out and that afterwards I would hand wash it and overlock the seams.

That plan would have been fine, however I didn’t let Phil in on it, and he threw the dress in the washing machine. My poor dress emerged from the machine ripped in a number of places along both sides of the waistband. 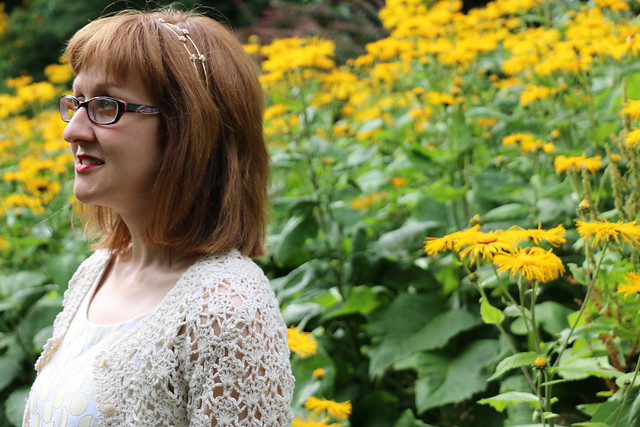 I allowed sufficient time to sulk, then went back, unpicked the zip and bodice lining, and overlocked the bodice and skirt to the waistband. During the surgery I was attempting to lose as little fabric as possible, which has left the waistband somewhat wonky, and messed up the skirt gathers, but it’s meant this dress has made it past it’s first wear! 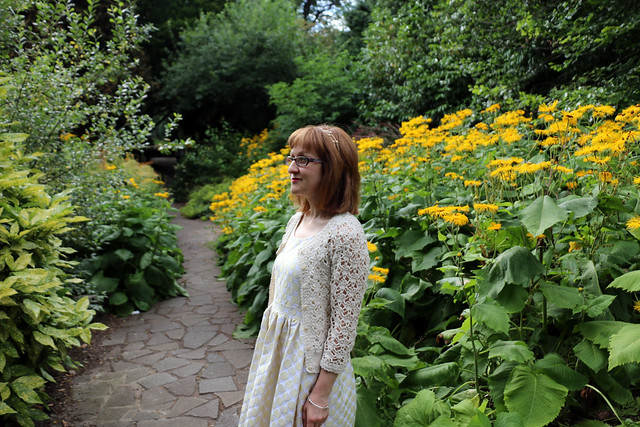 I get a bit of gaping at the front of the armholes which I’ll need to address if making it again, but this is a cute simple party dress, and works really well in a stiffer fabric like this brocade.

It’s pictured in a couple of these photos with a new favourite lace cardigan from People Tree, in 100% cotton, hand knitted in Nepal. 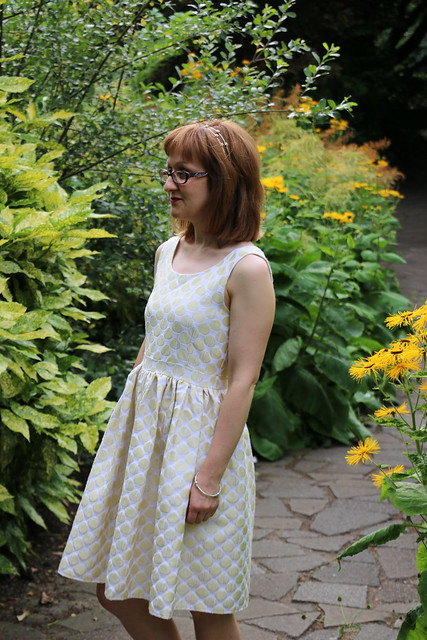 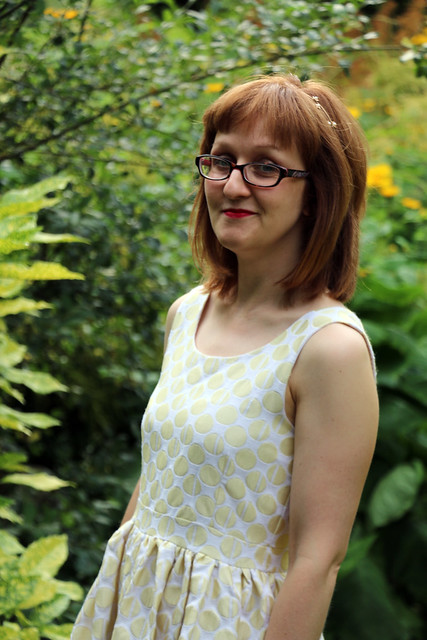 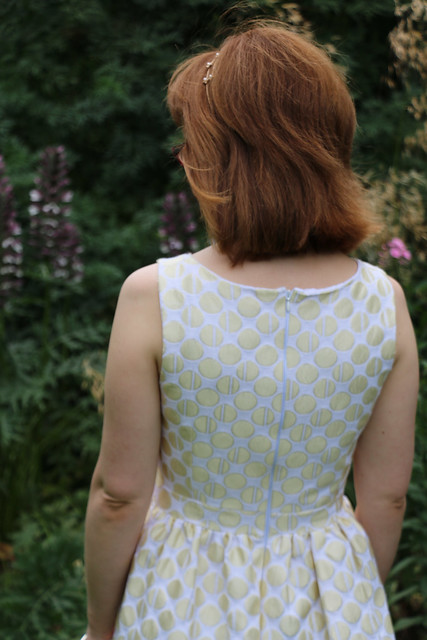 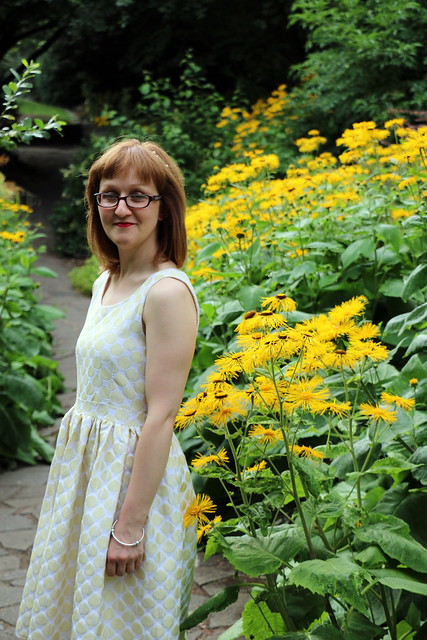 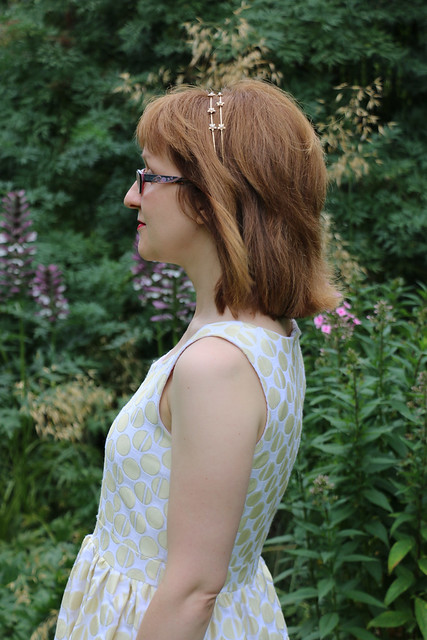 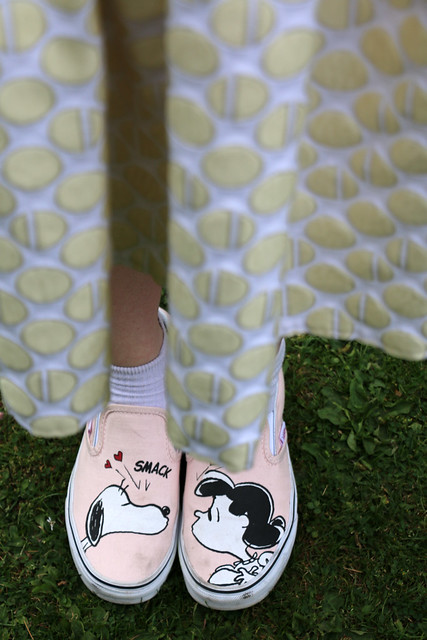 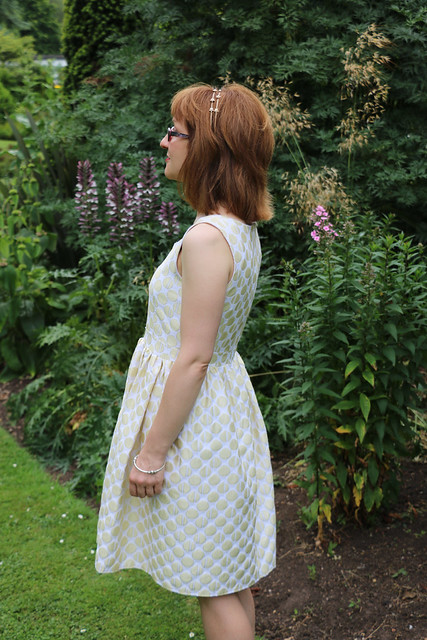 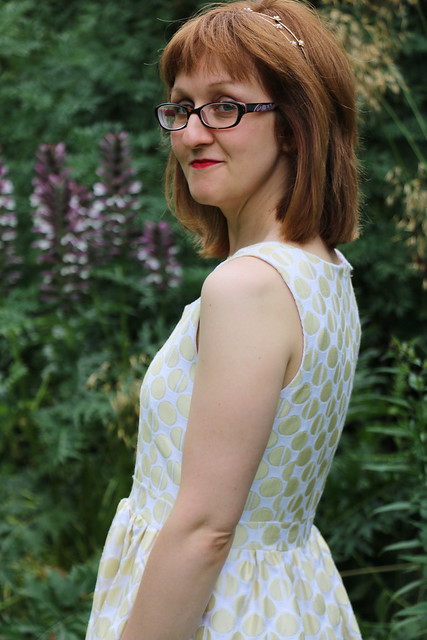 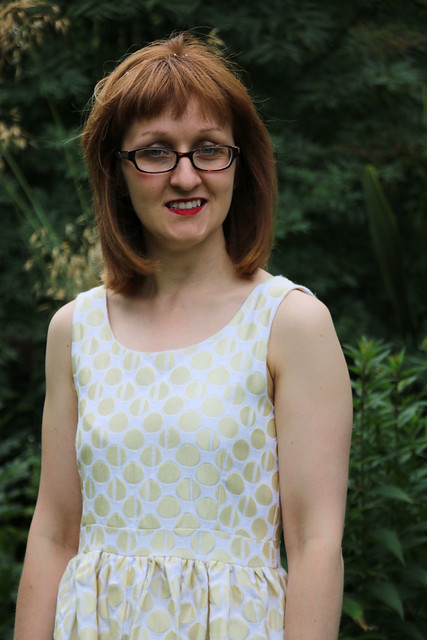 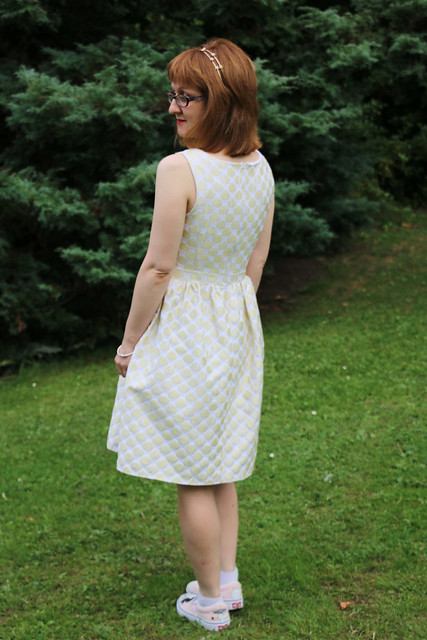 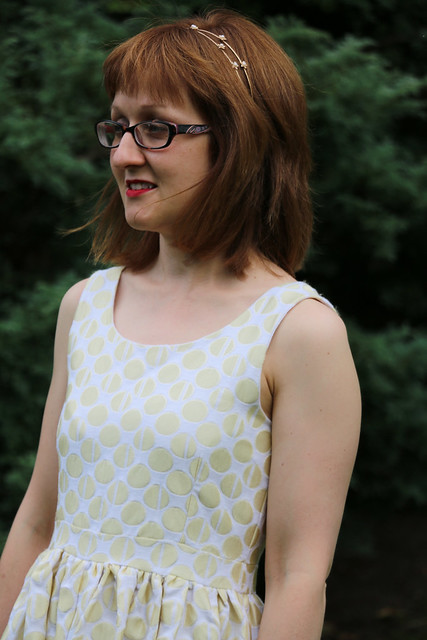 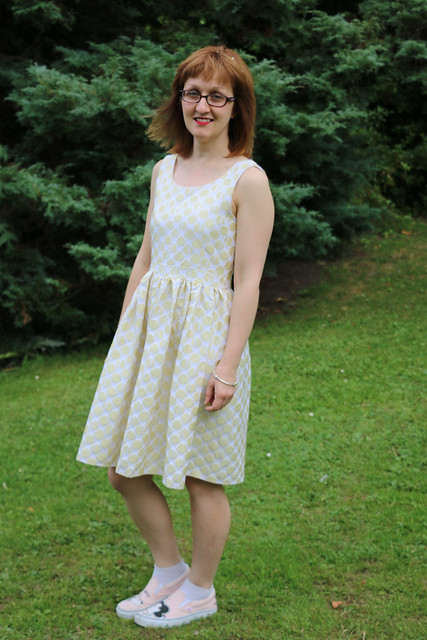