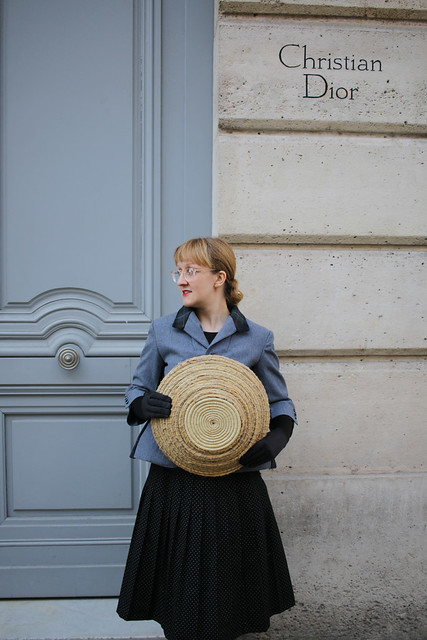 I wanted to go into more detail on the process of creating a Bar suit jacket as part of my contribution to The Refashioners 2018.

As mentioned previously, my starting point was a second-hand men’s suit jacket purchased in a local charity shop. The jacket appealed as it seemed to be a nice quality, and had labels inside stating that it was made in the UK from British wool. Clearly it differs from the inspiration in terms of both colour and material (the original Bar jacket was made in silk), but I thought a wool jacket would make for a more wearable end result. 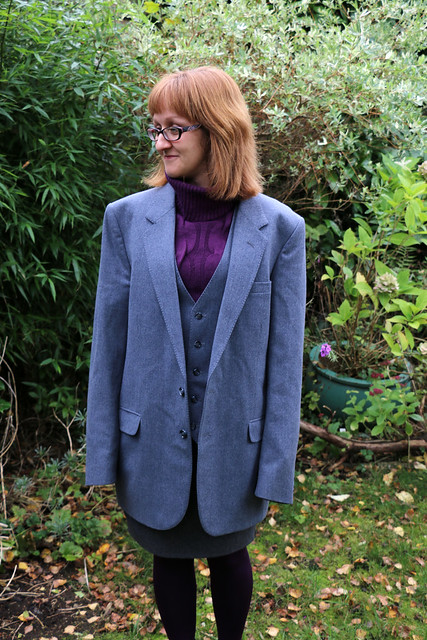 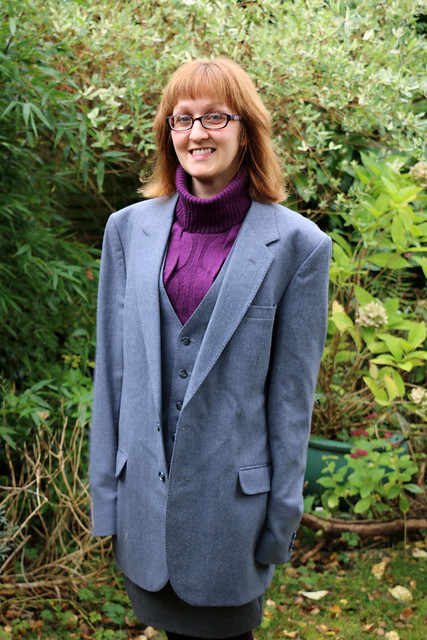 Although the original jacket looks huge on me, I had very little excess fabric to play with, so used some blue tweed British wool from my stash (purchased from Beyond Measure) for the contrast side panels and collar. Given that the original suit was made from British wool, I thought that this would be a suitable pairing and also add some interest in terms of colour and texture. I do think the end result looks like a very British interpretation of the Bar jacket, possibly due to the tweed!

In order to achieve the Bar jacket shaping I used Gertie’s Butterick pattern #B5962 as my starting point. A word of caution for anyone interested in my thoughts on this pattern, because I was working with an existing jacket, as opposed to fabric, there were lots of patterns pieces I didn’t use (including the collar, facing and lining pieces), and there were other pieces (i.e. the jacket front) where I only used the pattern pieces to help estimate where to cut or add shaping. 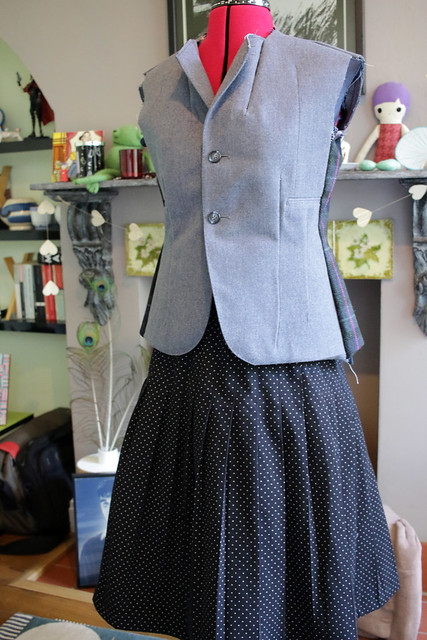 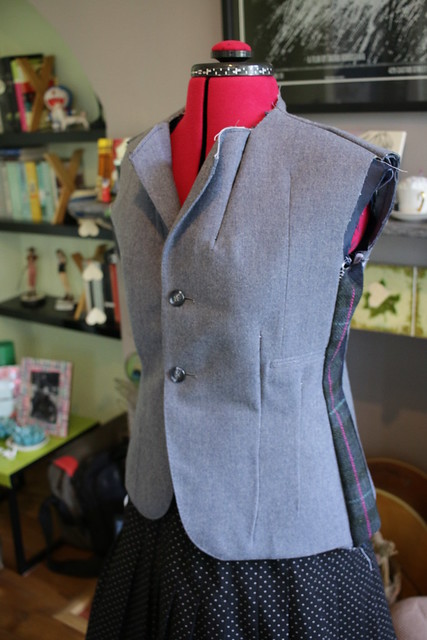 I did find that the B5962 pattern contains a lot of ease and I wonder whether Butterick included a standard outerwear level of ease, when a very close fit is clearly needed for this style. Based on my measurements, I originally graded between sizes 10 (bust) and 12 (waist/hip), however it turned out huge so I went back and reduced the top of the jacket (down to the waist line) to a size 8, grading to a 12 below the waist for added volume in the ‘peplum’ section. I also found the shoulders too wide on me so trimmed off 1.5 cm at the sleeve head, grading down to 1cm. I still think there is a little too much ease in the centre back, but I was way too far along to remove this before I noticed.

I managed to retain quite a few features of the original men’s jacket. For the jacket fronts, I used the B5962 pattern to estimate where to cut the inside seam, armhole and shoulder seam, plus where to add shaping – meaning I retained the original hem and front, including buttons, buttonholes and part of the collar. Similarly I retained the existing hem on the back of the jacket (including the back vent), and on the sleeves. The buttons on the sleeve are original, and amazingly I managed to identically match the original buttons on the front (in John Lewis) to increase the number of buttons from two to six. I was initially intending to retain the original collar but decided it looked a little bit dull, so retained the sections on the jacket front and used the remainder of original collar to cut a new version in blue tweed. 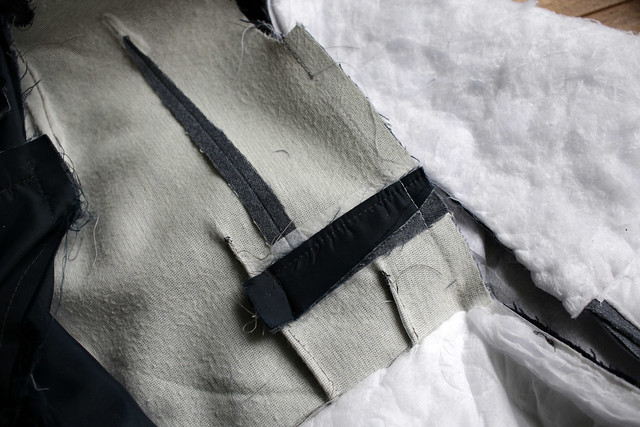 An awful lot of the time I spent on this jacket was spent on the insides – determining where to add, and where to remove, interfacing and padding. The jacket fronts were already backed with a lightweight fusible interfacing, but strangely the back wasn’t. I added a similar weight interfacing to the back of the jacket, and a heavier weight on the added blue tweed sections, since the tweed was much drapier than the original jacket fabric. I removed strips of canvas which were shaping the original collar and neckline, added shoulder pads, and I added padding (thinsulate, since that is what I already had in my stash) to the peplum section of the jacket to try and add body.

Gertie’s B5962 pattern attempts to replicate the Bar silhouette through a combination of long darts, and through the use of side panels. Having studied images of Dior Bar jackets, I believe that each jacket front is actually constructed of two panels, and I think these are needed to create the really dramatic Bar silhouette (the B5962 pattern uses darts in a similar position instead). There are less images online of the back of the Bar jacket (some good images here), but it also appears to be constructed from multiple panels (the B5962 back is constructed from two). It would have been difficult to retain as much of the original jacket if I had been attempting to recreate the Bar jacket more closely, but I would be interested to try a more faithful recreation at some point. 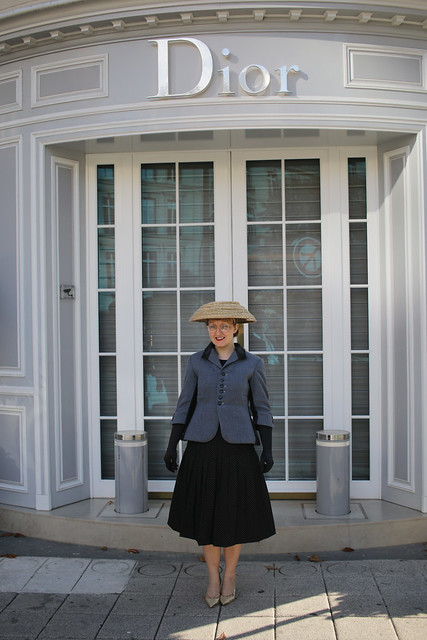 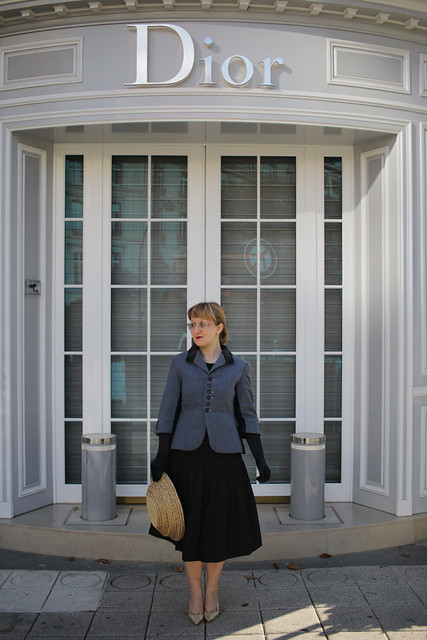 I had read online that hip padding would have been worn under the New Look outfits, to create the required shaping at the hips (see here for a video and here for a related sewing pattern). I decided to try and create some hip padding the evening before we left for Paris, and visited the £1 Shop to see what suitable supplies they might have! I found a pack of three sponges for £1, strung them together on some yarn (I sewed through the middle of each sponge), and tied it around my hips. I’m wearing my ‘hip padding’ in the pictures below (outside the Dior building with the blue door). You can see it does create a more exaggerated peplum effect, but I decided I preferred the silhouette without so I’m not wearing it in the other images. P.S. these images outside Dior (above and below) were taken around the original Dior studio at 30 Avenue Montaigne, founded by Christian Dior in the 1940s. 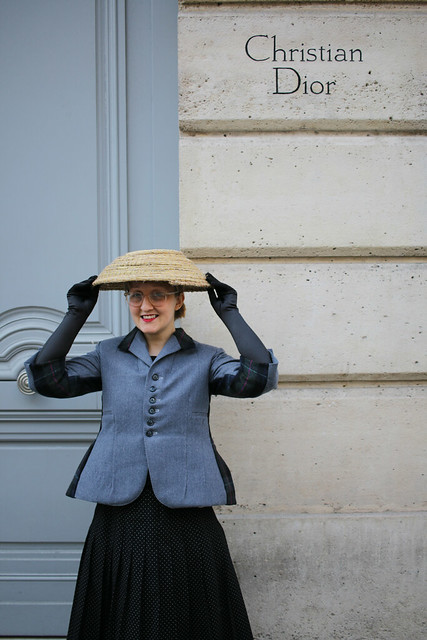 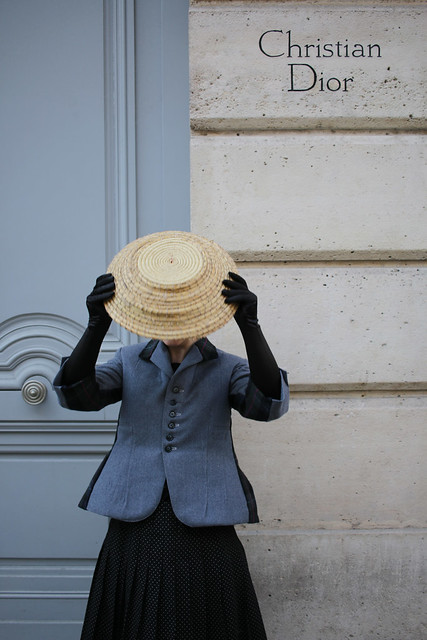 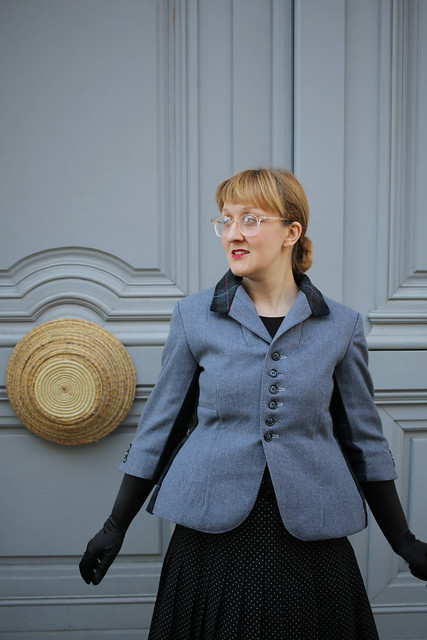 This outfit has occupied almost all of my sewing time for the last month, and I’m really proud of what I achieved, both in terms of overall effect and my ability to bring my plans to life. I definitely think that basic refashioning (like the skirt, which I simply reduced in length) makes for a quick, satisfying sewing project, well suited to a beginner. However, I think that dramatically altering a garment (like the jacket in my refashion) can be significantly more complex and time consuming than sewing with fabric. This type of refashioning makes for an interesting challenge, but I don’t think I would have completed this jacket with less years of sewing experience under my belt. It’s definitely a indication, to myself, that my sewing skills have reached a point where I am able to interpret what isn’t working, and how I might resolve it, as opposed to needing to rely solely on instructions (although nice simple instructions are still very nice!).

I have one further post to share with you about this outfit, about how I made my hat. 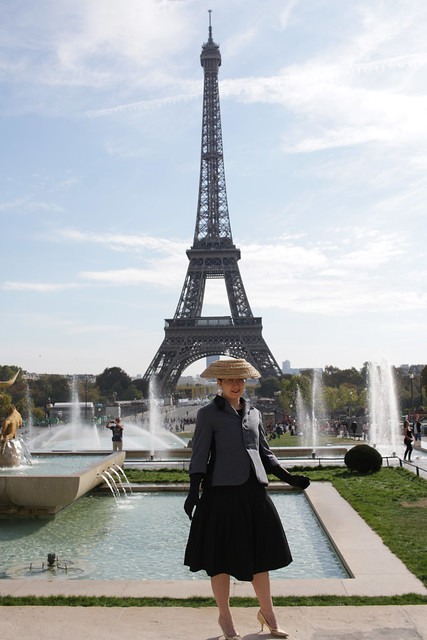 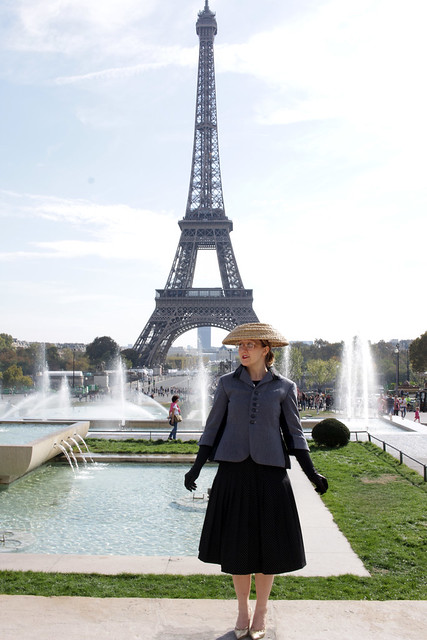