At the beginning of the year I set myself the goal of sewing three items of clothing that I’ve never made before – trousers, a swimsuit, and a coat. One down, two to go, as I recently made my first pair of trousers! 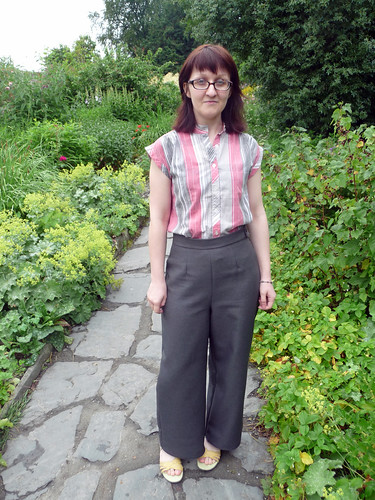 Simplicity contacted me last month and offered me a free pattern. With my trouser-sewing goal in mind it was a no-brainer to go for Simplicity 3688 which is a reproduction 1940s pattern. The pattern includes four separate items – I’m never going to make the skirt suit but the trousers and blouse were more than enough to win me over. Helpfully the pattern envelope includes both the adorable original illustrations, and photos of the finished items which (while not exactly thrilling photos) allowed me to get a sense of the finished shape. I was totally sold after a quick google identified that Karen and Debi amongst many others have previously made gorgeous versions of the same trousers (Debi has also made the blouse). 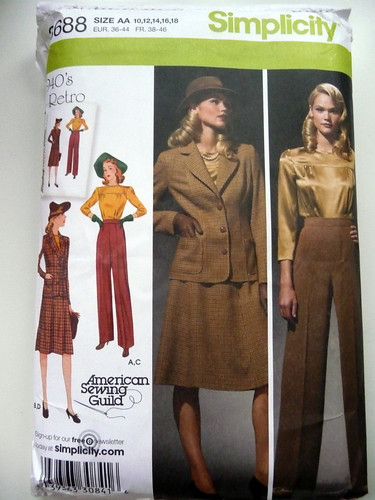 I would totally recommend these trousers to other trouser newbies. They are made from only three pattern pieces (five fabric pieces) and are a quick make (yippee, my favourite kind!). Personally I love the vintage shape with the high waist & wide leg. I used a grey polyester suiting fabric which has a nice drape which suits the wide leg & is light-weight for the summer. I’m thinking a wool pair would be great when the weather gets a bit colder (which, to be honest, could be at any time in the UK…). I cut a size 10 (based on the finished measurements, NOT the measurements on the envelope). The size 10 was actually a tiny bit smaller than my measurements so I sewed with a reduced seam allowance at the sides. The pattern uses the side seam allowance to cover the zip – my reduced allowance meant that wasn’t really possible so I just used an invisible zip instead of the standard zip recommended. 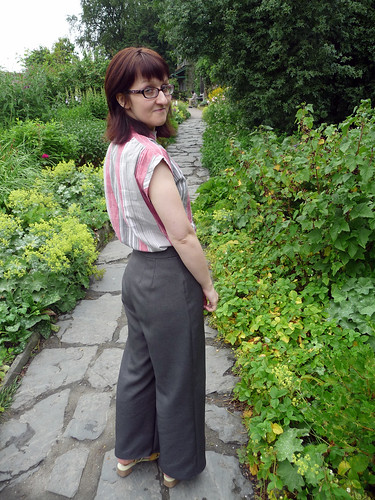 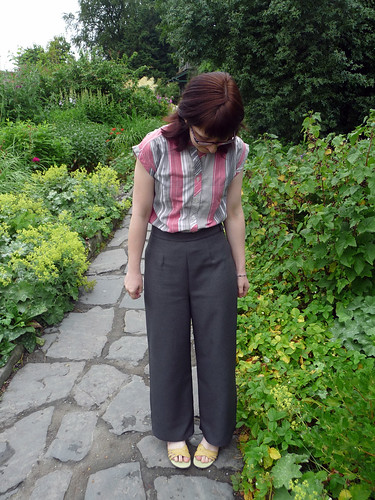 The automatic buttonhole function on my sewing machine has stopped working recently. How a machine can work perfectly except for the buttonhole function I do not know… It’s the most infuriating fault as it will sew 2-sides of the buttonhole but then stops! I’m planning to take it for a service soon but while waiting I attempted to use press studs on the waistband of these trousers instead of a button. I thought I’d found an easy workaround until the first time I wore them when I found that the press studs popped open every time I bent down! So I borrowed my mom’s sewing machine & attached a nice secure button instead:) Press studs +  waistbands = not a good idea! 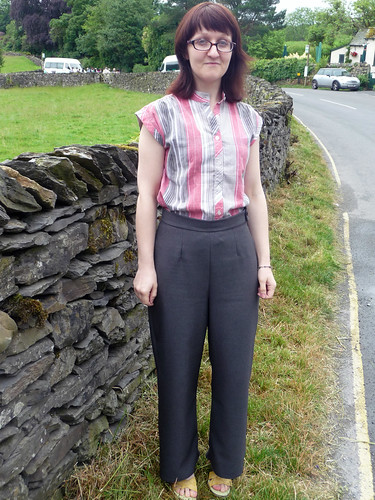 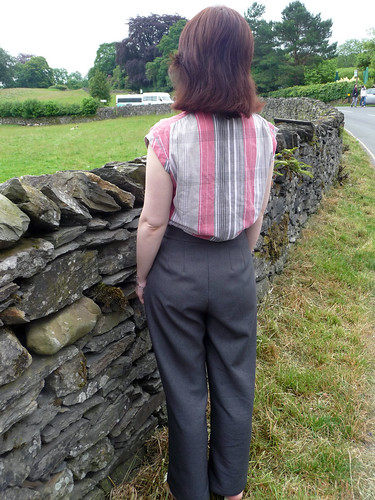 Me and Phil have been lucky enough to spend the last few days on holiday with my family in the Lake District. The photos above were taken in the garden at Beatrix Potter’s House and just outside. For those outside the UK who may not know it, the Lake District it is like a storybook version of England – all tiny villages, countryside, slate and stones walls. Basically it’s gorgeous. Obviously it also contains lots of lakes, like Coniston Water pictured below along with some wide trousers billowing in the breeze! 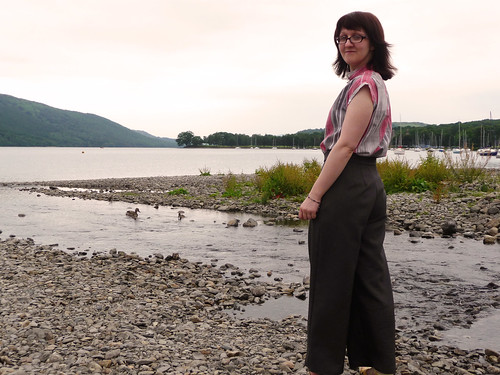